The Sivrihisar Grand Mosque - known as Ulu Mosque - is a historical mosque in the town of Sivrihisar, which is within Eskişehir Province. It was built by Leşker Emir Celaleddin Ali in 1231-1232 during the reign of Anatolian Seljuk Sultan Kayqubad I (r. 1220-1237). It has been restored two times: first in 1275 by Eminüddin Mikail bin Abdullah, the regent of Kaykhusraw III (r. 1265-1284), and then again in 1440 by Hızır Bey, a judge from Sivrihisar as well as later Istanbul's first judge. As one of five known examples of wooden colummned architecture technique.

The ground area of the mosque is 1,485 square meters. There are four entrances on the outer walls which made it possible for different prayer groups to go in through separate gates or doors. The roof is covered by tiles and replaced with lead sheet recently. 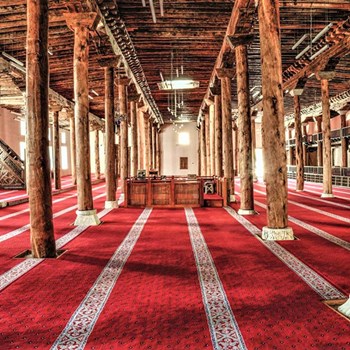 The roof is carried by 67 wooden columns in the inside, of which the upper parts are decorated with painted engravings of figures mainly done in green, red and black colored paint. Some columns stand on stone bases that likely originated from Pessinus, an ancient city known as Ballıhisar today near Sivrihisar.

The mosque has six naves in an east-west direction. The middle two rows of naves are higher than the others and resemble historic tents used in Central Asia that were popular during nomadic times. One of those ornamental masterworks is a minbar from 1245 by Horasanli Ibrahim Mehmet which was made out of walnut trees with geometrical and floral designs engraved into the woodwork. The minbar is believed to have been moved here from the Sivrihisar Kılıç Masjid, which was torn down in 1924. The top turret was added by Osman oğlu Hacı Habib in 1409-1410 as shown on its inscription.

The Sivrihisar Grand Mosque, located in the Central Anatolian province of Eskisehir, has been listed on the UNESCO World Heritage Tentative List since April 13, 2016.