In the area, which is the meeting point of different religions and civilizations, each civilization has added an exceptional value to the area in terms of their own beliefs and has kept this sacred land alive by erecting structures such as Eastern Roman, Seljuk, Dulkadiroğlu Principality and Ottoman Empire periods. It is possible to find traces of these reigns from its early history through buildings still standing. 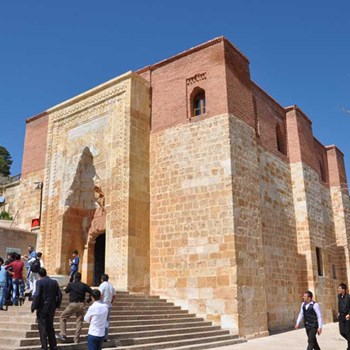 According to sources this church was built by the Byzantine Emperor Theodosius (408-450). Later, Nusretüddin Hasan Bey, who was the Emir of Maraş from the Anatolian Seljuks, had a series of constructions-including today's mosque-built on this church. It can be seen that some materials from the church were used in the construction of the mosque; however, these two buildings are merged beautifully.

The other structures of this complex, which was built by Nusretuddin Hasan Bey; Ribat (structures used for military purposes along the border and in strategic positions) (1215) and inn (1233), which provide the accommodation and meeting the needs of the visitors. Later, the complex was enlarged with the madrasah (1480-1492) and women's mosque (1500) built during the Dulkadir Principality period. Pasha Çardağı was built in 1531 during the Ottoman period.

According to a very popular legend in Christian and the Islamic spheres during the Middle Age; in a city called Efsus or Yarpuz, a tyrant Roman Emperor, Dakyanus (Dakyus) gets people to worship himself and idols. (A.D. 250). At a time when the belief to the mythological God lost its power, these seven Christian youths called Yemliha, Mekselina, Mislina, Mernus, Sazenus, Tebernus and the Kefestetayus break away from being persecuted as they go against the tyrant's command by believing in one God and worshipping secretly. After Dakyanus learns, these youths pull away and come across with a faithful shepherd as themselves. The seven sleepers shelter in a cave that the shepherd knows and they fall asleep in there. The emperor's viziers find the cave. They can’t come in because they are scared, then they cover the entrance of the cave to keep the youths in.

Due to its importance, the 18th chapter of the Quran is called "Kahf," and it tells what happened there. Christians revere the "Seven Sleepers" as saints, with Muslims considering them miracles. The Eshab-ı Kehf Complex was registered on UNESCO's World Heritage Tentative List in 2015.