The aptly named Kaymakli Underground City in Cappadocia region is world-renowned for its beauty and have 1 million visitors per year. Out of the 34 underground cities, it is the largest one and compulsory site to visit. The city was started to be built by Early Christians in the first years of Christianity to protect themselves from the cruel persecution of the Roman Soldiers. The only official religion in Romans was the Pagan Religion until 4th century and the people who do not believe in that was brutally persecuted by the soldiers.

The Christians of Cappadocia found the solution of living underground when they realized soldiers were rounding up people for attacking their village. Kaymaklı Underground City is an elaborate maze made from tunnels, caves and one can easily get lost here as it is a huge complex. 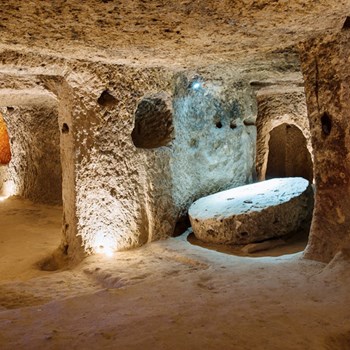 Kaymakli is arranged like any other underground city, but the most interesting and impressive aspect of Kaymakli is its organized, carved, and exceptionally well-thought nature. The various amenities including living rooms, sleeping quarters, stables, kitchens, storage sections to churches and graveyards are all in the city.

Kaymakli Underground City has been listed as a part of UNESCO World Heritage List in 1985. The city has been opened to the visitors since 1964 and levels 1-4 have be unearthed so far. Kaymakli's ventilation system ensured all rooms had equal access to oxygen via air shafts on every level; there are 18 separate vents for this 60 meter deep cave city.

If you would like to visit this place on your own, you can use public buses departing from Goreme bus station. Firstly, you need to reach up to Nevsehir city center and change the bus for Kaymakli town. It is 30 km far from Goreme town but it will take longer from Nevsehir center. It will take over 1 hour to get to the underground city by public buses. It will be same for the guest who are staying in Urgup , Avanos or Uchisar hotels. They need to arrive to Nevsehir city center then they need to find the buses for the town. Admission to the underground city is 60 Turkish lira per person, and the GPS coordinates are 38°27'36.8″N 34°45'07.2″E.