The Bridge of JustinianPlaces to Visit in Sakarya

The Bridge of Justinian

The Sangarius Bridge, also known as the Bridge of Justinian or Beşköprü, is a late Roman bridge over the river Sakarya and was built by East Roman Emperor Justinian I (527-560 AD) to improve communications between Constantinople and Eastern provinces.

With a length of 430 meters, this bridge was mentioned by several contemporary writers and is associated with a purported Roman project to construct a canal that would bypass the Bosporus. 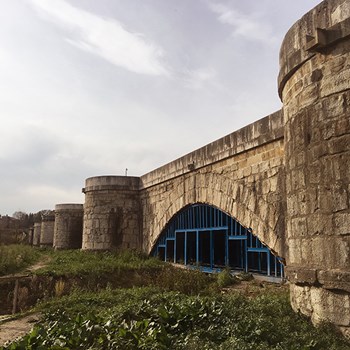 Originally built in the first half of the sixth century, The Bridge of Justinian was strategically important for both military and economic reasons. The stone bridge served during a time when people were frequently killed by flooding on the pontoon bridges they used instead.

This bridge is a highway, a telegraph and post office in one. Completed more than 1500 years ago by Emperor Justinian I, it was the first attempt to reinvent Roman greatness. Strategically connecting key regions in the East and West of ancient civilizations, Justinian Bridge is historically significant for embodying compelling visual symbolism. This symbolism is expressed through an outstanding design that features a monumental triumphal arch as well as apsed structures at either end.

The Bridge of Justinian is a perfect example of the late Roman architectural-engineering cultural accumulation and its excellent use in military structures and public works.

The Bridge of Justinian has been added to the Tentative List of UNESCO in 2018.