St. Pierre Church is located west of Asi River and the west foot of Hac Mountain, on the antique Antiokheia city's location. There it became a significant point in society as it was right near Agora square during its extension between II. and IV. centuries. None of the written records that can help date the building. However, studies have suggested that the site was used by Christians in Antakya since their first arrival to the area.

The cave in which the church was constructed is where St. Pierre first preached, and later turned into an official building with 9.5 m width, 13 m length, and 7-m height. 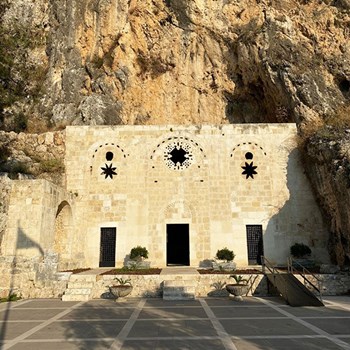 The first construction of the building is thought to consist of a vaulted space that was acquired by caving a huge rock. This part dates back to an early time, around 38-39 AD. Secondly, stone walls and two stone columns were added; with these additions, the building was enlarged. By adding these elements, three barrel vaults were created in this building with each holding one nave.

St. Pierre, to whom the church was dedicated, is the founder of the Antakya Church and archpriest of the first Christian Community here. St. Pierre's church played a significant role in early Christianity specifically in expansion of belief; because it hosted Christians at their meetings for centuries, it bears immense importance in Christianity and history as a whole.

Amidst the rich history of Antakya where Christianity was transformed and expanded around the world, St. Pierre Church played an integral part because it acted as a witness to this process. Among visitors from other religions who often worship in the temples situated nearby, this religiously significant monument is venerated and respectfully treated by local people.

In 1963, Pope Paul VI decreed that all pilgrims should visit this historic site on pilgrimage tours. Saint Pierre Church is now open to all with a beautiful garden surrounding the monument. The church has been added to The Tentative List of UNESCO in 2011.