AlanyaPlaces to Visit in Antalya

The town of Alanya is around 100 kilometers (65 miles) east of Antalya on a peninsula between the Mediterranean Sea to the south and the Taurus Mountains to the north. It's one of Turkey's most popular holiday spots today, especially for sun-sea-sand lovers. There are several beaches with a blue flag there.

The town stands in between Cilicia and Pamphylia regions to the south. It is uncertain whether the area was inhabited prior to the Ice Age, but during excavations in several caverns nearby, it became apparent that it had been since the Paleolithic period. Coracesium was its name around 4th century BC. 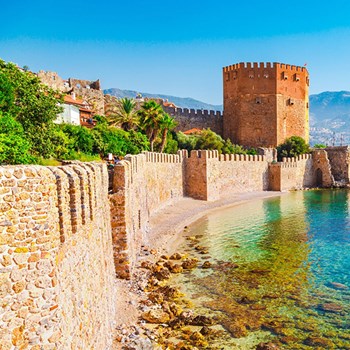 Alanya was captured by the Seleucids, but they were unable to maintain control. It later became a haven for pirates, especially during the rule of rebel Diodotus Tryphon. Pompey the Great captured the city in 65 BC and put an end to piracy's reign. During the Roman period, when it thrived and minted its own coins in the 2nd century AD, it represented wealth and prosperity.

The city was ruled by the Byzantines after the fall of the Roman Empire. They named it Kalonorosa, which meant "beautiful mountain" in Greek. During the Byzantine era, little is known about the city, but it most likely remained a Christian metropolis like Cilicia and Pamphylia.

The city changed hands between the Seljuk Turks, Byzantine Emperor Alexios I Komnenos, and the First Crusade during the 11th and 12th centuries. Finally, in 1221, Alaeddin Keykubad I of the Seljuks captured it and renamed it Alaiye. During this period, when the city was at its height, major construction and repair initiatives were carried out by sultans, making it a significant trade center for western Mediterranean. The city was captured by the Karamanlids and other Anatolian princes, as well as the Lusignans from Cyprus and then the Egyptians, during its history. During the Ottoman period after 1453, the city lost importance. It's claimed that Atatürk changed the name of Alaiye to Alanya in 1933.

Alanya Fortress: The town of Alanya boasts a spectacular castle built on a hilltop and surrounded by a 6.5 kilometers (4 miles) long wall with 140 towers and about 400 cisterns. The fortification reaches 250 meters (820 feet) above sea level in its highest section, which is located to the west of the hill. The castle we see today was erected during the 13th century by Alaeddin Keykubad, Seljuk Sultan, but its foundations date back to antiquity when it was known as Kemeros Hill or Ali Pasha Castle.

There were arched main gates with inscriptions on them, as well as several smaller auxiliary gates. Today, many of them are destroyed. There are a number of ancient buildings within the castle, including brick storage tanks, baths, and Byzantine churches. The road leading to the castle is accessible to cars but narrow; you may trek to the top in about one hour if so desired. On the sea side of the road there are restaurants and cafeterias available for dining. 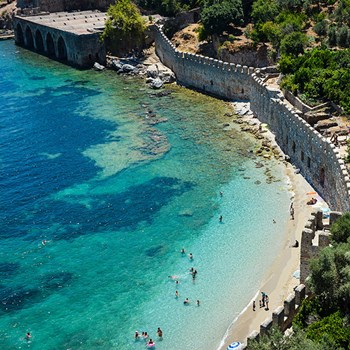 Kizil Kule (Red Tower): The Great Red Tower, also known as the Alanyalı Kule (Alanya Castle), is one of the most iconic Seljuk monuments in town. This 33-meter-tall tower, which served as a lookout for the port and dockyard, was erected in the 13th century. With its octagonal form, it became Alanya's icon today. A cistern lies beneath the tower's center, and large stone steps enable you to reach the top. The name comes from the red bricks used in construction of its summit, while the base was constructed with local stone. There are five stories in this tower, with the lowest level being used for displays.

Tersane (Shipyard): The shipyard, built during the Seljuk era, was again built by Alaaddin Keykubat, Seljuk ruler of Anatolia in the 13th century, and is located to the south of the Red Tower. The building, which measures 56 x 44 meters (183 x 144 feet), features five arched galleries connected to one another by the sea. The shipyard is also home to offices and a modest mosque on the left side of the portal. Small boats may be taken there from the sea, and access is free. The structure is now brightly lit at night. There's also a fortification adjacent to the shipyard located on a rock where cannons for battleships were produced, with an adjoining gun house that has guns for similar purposes.

Damlatas Cave: In 1948, during the construction of Alanya Harbor, the cave was accidentally discovered. It quickly became one of the most popular destinations in the region because it is claimed that the air in the cave is beneficial to asthmatics. Thousands of years old stalagmites and stalactites draw a large number of visitors to the cave. It has more than 90% humidity and a temperature of roughly 22 degrees Celsius. Damlatas Cave is about 30 meters (100 feet) deep and 15 meters (50 feet) high, according to local reports. Other notable caves in the region are Dim Cave, Hasbahce Cave, and Sea Caves.

As a whole town, Alanya, has been inscribed to the Tentative List of UNESCO in 2000.