The ancient city of Aizanoi is located in Western Anatolia, 48 kilometers southwest of Kütahya Province and is part of the Çavdarhisar district.

Aizanoi, with less information about this city from the pre-Roman era, is said that there has been settlement in this region since prehistoric times, and layers dated to the 3rd millennium BC were unearthed during excavations around the Zeus Temple. 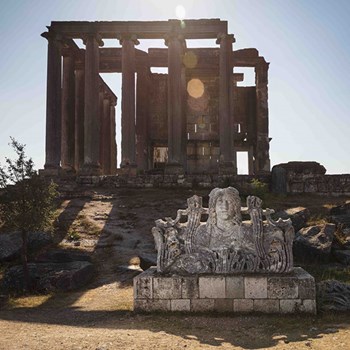 Aizanoi became important in the political sense during an era of conflict between Bithynia and Pergamon. In Hellenistic times, Aizanoi alternated between hegemony for both Pergamon and Bithyna respectively, while Roman control took over by 133 BC.

This case shows that Aizanoi was in metropolis statue in the first century BC. However, big monumental public buildings and urban infrastructure in the city were constructed during the early imperial period. During the Roman Period Aizanoi was not only one of the most important cities in the Phrgyia Region but also had an important status as a commercial road network. Through its production of cereals, wine and sheep's wool the city was to rise to prosperity during the period of the Roman Empire.

Due to the intensive construction activities that were realized during the 2nd and 3rd centuries AD., local stone workshops gained importance in those years. The Aizanoi region had a close relationship with Roman communities as religious and political power increased.

The city was the seat of a bishopric during the Byzantine Period, but lost its importance after the 7th century. In medieval times, the hill upon which this temple stands became an important fortress to various Seljuk dynasties; as such it is today called Çavdarhisar.

The Temple of Zeus, situated on a hill, is one of the best preserved temples in existence. The temple was used as the city's main sanctuary and there are many structures under it disguised to look like vaults. The building has an unusual design where space between columns is doubled than that of the inner rooms' walls which results in a pseudodipteros plan with wider outside pillars.

The round building (Macellum) in Aizanoi is dated to the middle of the second century, and it probably served as a food market. It contains inscriptions that show the prices of all goods sold in Imperial markets controlled by an edict from Diocletian, issued on 301 AD to fight inflation at that time.

The remains of the city are mostly from the Roman Empire and include two areas: a temple to Zeus, The Complex of Stadium-Theatre, Macellum, Portico Street, Bridges and Dam with odeon (a small theatre), and baths.

Aizanoi Ancient city has been added to the Tentative List of UNESCO in 2012.