The Yesemek Quarry and Sculpture WorkshopPlaces to Visit in Gaziantep

The Yesemek Quarry and Sculpture Workshop

The Yesemek Quarry and Sculpture Workshop is located on the West side of Aslanlıtepe (Karatepe) in the Yesemek Village. The workshop covers an approximate 400x20 meters area beginning from a watercourse coming from the Yesemek brook rising up 90 meters.

Situated about 110 kilometres from Gaziantep and near the western border with Syria near Aleppo, Yesemek National Park is not only a Turkish national park but also part of UNESCO's World Heritage Site tentative list for Turkey since 2012. 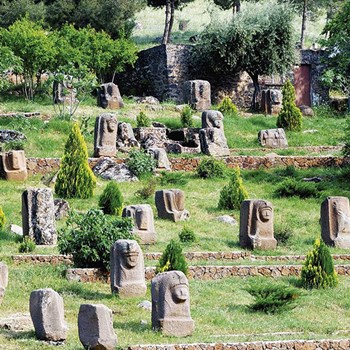 It is accepted that the Yesemek Sculpture Workshop dates back to 900-800 B.C. during the Late Hittite States period, according to excavation findings. It was estimated that production continued for some time after this date as well and it's likely that sculptures were made in the workshop in Samal Kingdom period. Once the Kingdom collapsed against an invasion from Assyria, workers left for other places while what remained was abandoned - including this quarry site which then became a tourist attraction where visitors are able today to find fantastic statues alongside ancient reliefs all over these hillsides, with centuries of history represented right here at once.

The difficulty of transporting these blocks was a key indicator for the technology and art of that period. In addition, this region is one where people experienced the exchange of values among themselves.

Yesemek Sculpture Workshop is the largest sculpture workshop of the ancient age in Anatolia and one of the most important centers for Cultural Heritage inventory. Hundreds of sculptures, many god reliefs and more than 300 fragments have been transferred as rough copies to modern days without almost any damage. These sculptures are not only artworks; they also represent religious beliefs from their era.