Neolithic Site of ÇatalhöyükPlaces to Visit in Konya

Catalhoyuk is renowned as one of the earliest settlements of the Neolithic era, and sheds light on the dawn of human settlement with unique examples of early domestic architecture and vivid evidence of a mother goddess cult.

Catalhoyuk is a Neolithic site in Turkey, where the earliest discoveries date from 7400 BC. These findings are important to uncovering mysteries about the beginnings of agriculture and civilisation. Catalhoyuk shows evidence of equality among people - their social organisation and urban design reflect this. The tumulus at Catalhoyuk shows that mining has been going on for millennia here in Anatolia and proves people have used it alongside farming, hunting, gathering since Neolithic times. 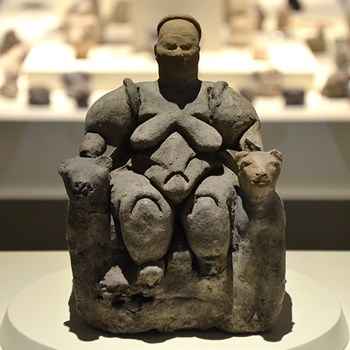 Catalhoyuk is notable for being the first site in the world where a city plan was depicted on wall paintings. Seals from the site show that housing practices were important to those who lived there, as they developed concepts of property ownership and trading goods long before writing was used.

The tumulus is an exceptional ancient architecture with a history that goes back approximately 9400 years. When a family's time in the household ended, it was filled with earth and a new one was built on top. Building new layers of family mountains on top of each other created the present day 21 m tall mound. Excavating the mound revealed that there were 18 structural layers and that the materials used in construction are cob, timber and reeds.

The ceilings were made of compressed soil/reed mats, with an entrance being through a trapdoor on the ceiling and ladder to the floor level. Each adobe had both a room and storage area, each room containing one square cooking hearth. The walls were plastered/whitewashed over which yellow, red, black pigments used to create wall paintings. Skulls of bulls- rams- stags conserved with compacted clay attached to the walls alongside humans and animals reliefs unearthed alongside them.

One of the most significant finds from Catalhoyuk was the figurine of the mother goddess. These indicate a reverence for fertility, proving that belief during this time focused on an all powerful goddess.

The Neolithic archaeological site at Catalhoyuk, located in Konya Province, was added to the UNESCO World Heritage List in 2012 for cultural reasons.