Ani is a medieval Armenian city in Kars Province located at the far eastern tip of Turkey. It was the capital of Eastern Armenia and Bagratid Kingdom until its capture by Byzantium. Ani has been targeted by so many natural disasters and invasions-- Mongols, Tamerland, earthquakes-- that it appears as a town surrounded by the ruins of imposing stone walls.

The City of Ani is located on a plateau in northeast Turkey overlooking the ravine that forms the natural border with Armenia. Together, the residential, religious and military structures created an urban scene built up over centuries by Christian and then Muslim dynasties. The city flourished in the 10th and 11th centuries CE when it became capital for Armenian Kingdom of Bagratids. After being conquered by the Byzantines, Seljuks, and Georgians in succession; it maintained its status as a crossroads for caravans. A very devastating earthquake took place in 1319 that started the beginning of decline. 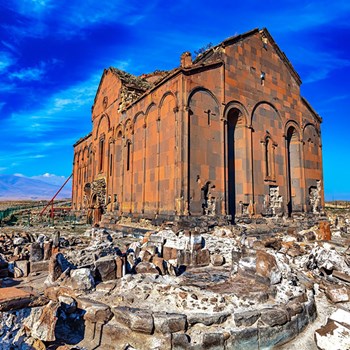 The ancient city of Ani has been known for its magnificent monuments based on Armenian architecture. It houses several churches, cathedrals, palaces, and fortifications which were amongst the most technically and artistically advanced structures in the world during their time. Ancient stone ruins spread over an extensively large area show excellent examples of Armenia’s civilization, including the oldest mosque of Turkey from 1072.

With its military, religious and civil buildings, Ani offers a wide panorama of medieval architectural development thanks to the presence at the site of almost all the architectural types that emerged in the region in the course of six centuries from 7th to 13th centuries AD.

Ani is home to some of the most spectacular ancient ruins in all the world. Some of them are: Lion engravings on the city walls, Cathedral of Ani, Menucehr Mosque, Seljuk Caravanserai, Tigran Honents Church and Seljuk Bath.

Cathedral of Ani: A landmark of the ancient city of Ani, the cathedral is a wonderful display of Armenian architectural skills. Built in 1001, this fantastic cathedral remains one of the largest standing buildings in the area.

Menucehr Mosque: Built by the Ani Emir Menucehr in 1072, is the first Seljuk mosque in Anatolia.

Tigran Honents Church: Intriguing remains of frescoes can be found on the walls of the Church of St. Gregory. There is also well-preserved relief work, including animal motifs, which can be seen on the south wall.

The Historic City of Ani, inscribed to the UNESCO World Heritage List in 2016, has numerous churches, mosques and caravanserais. It is beautifully encircled by imposing fortifications.