Soganli ValleyPlaces to Visit in Nevsehir

The Soganli Valley is a result of landslides following earthquakes. It has been occupied since the Roman period, and residents predominantly buried their dead in rock cones on its slopes. Later, the Byzantines used these cones as churches. Frescoes can be seen inside some of these churches from the 6th and 14th centuries. Some important ones are Karabas (Çukurbağ), Yılanlı, Kubbelli (Kubbele) and Church St Barbara (Tahtali). 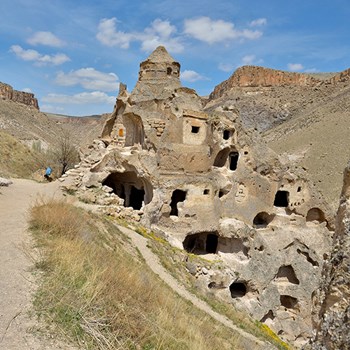 The Karabas Church, which is located on the right side of the valley between two villages, has a nave and apse. The church was painted at different points in history with different techniques. Scenes include Deesis, Annunciation, Nativity, Presentation of Jesus in the Temple (also known as The Childhood of Christ), Transfiguration, Missions of the Apostles to Preeach Christianity, Crucifixion, resurrection, Ascension and portraits of the saints.

The Snake Church is in close proximity Karabas Church and it is one of the most interesting churches in Cappadocia. Saint George's Chapel, or the Snake Church (also called as Saint George Church), because there is a depiction of St. George when he kills a dragon. The church also has a fresco that is one of a kind in the world called Mature Jesus. As this is not possible to see Jesus when he was an old man, the locals thought that he will be an old man on the Day of Judgement. The church also has some other frescoes depicting life after death.

The Kubbeli Church lies to the north of the village, at the left side of a small valley. It has an impressive dome that was carved from rock, and it is one of only two examples in the entire Cappadocia region. The church displays advanced architectural techniques. It is dated back to 14th century AD and is basilica-style with three naves and three apses. Scenes (in a quite destroyed form): On the main apse Prophetic Vision; on the side apse Deesis, on the vault Massacre of the Innocents, Pursuit of Elizabeth, Annunciation, Visitation, Proof of the Virginity, Adoration of the Magi, Flight into Egypt, Presentation in the Temple, Killing of Zacharias,Calling of John, John meeting Christ, Preaching of John, Baptism, Christ and Zacharias, Marrige at Cana, Miracle of the Wine, Jesus and the Samaritan Woman, Entry into Jerusalem, Healing of the Nobleman's Daughter and portraits of the saints.

Tahtali church lies at the end of a valley to the west of town and is made from a single-apsed, single-naved building with barrel vaulting. It dates back to around in literal terms the beginning of the fourteenth century and is interesting due to its many picturesque portrayals of saints. Scenes : On the apse Prophetic Vision, on the vault Deesis, Annunciation, Visitation, Proof of the Virgin, Journey to Bethlehem, Nativity, Anastasis, Seven Sleepers and portraits of the saints.