Early Christians faced a great deal of persecution from Roman soldiers, as the pagan religion was the only one officially sanctioned in Rome. Communities who are pressured by this persecution had to relocate where they would find more accommodating lodging.

By the end of the second century, a large Christian community had relocated to Cappadocia because of persecution. These people carved some monasteries with small-sized churches in them. Cappadocia and Goreme Open Air Museum is one such monastery complex. There were 34 churches originally but 9 remain as part of the museum.

The first carvings you see as you enter the monastery are on either side of the entrance. The nuns and monks who lived in this area carved their nunnery and monastery into small cell-like spaces within a communal public village. Just like our homes, the nunnery and monastery have living quarters for their members, sleeping quarters, kitchens, dining rooms and storage areas. There is one difference: all these carving were done by hand into rock walls

Saint Basil Chapel is part of a monastery located next door to the nunnery and dedicated to Saint Basil, protector saint of Cappadocia. The chapel was originally constructed in the 4th century, with an additional 11th-century restoration. It can be seen as one of the simplest churches in Cappadocia’s museum complex. In its walls you can see depictions from Orthodox culture, including portraits of Virgin Mary and Baby Jesus; St Theodore; St Basil; 2 female saints (name unknown). The church also has a cemetery attached wherein many monks are buried. 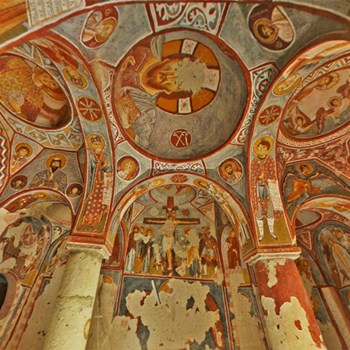 The Apple Church in Goreme Open Air Museum has a closed cross-shaped plan with four columns, nine domes and three apses. The original paintings date back to the 4th century and are geometric and have crosses. In the 11th century more sophisticated paintings were painted on this church that have survived until today. The paintings in the church is as: Deesis, Nativity, Adoration of the Magi, Baptism, Raising of Lazarus, Transfiguration, Entry into Jerusalem, Last Supper, Betrayal of Judas, Way of the Cross, Crucifixion, Entombment, Anastasis, Women at the Tomb, Ascension, the Hospitality of Abraham and Three Young Men in the Fiery Furnace.

Saint Barbara Chapel is probably the most attractive building in the entire museum complex because it has paintings which represent different types of religious and abstract figures. The hard to understand composition is more like an absurd style from iconoclastic periods. It’s thought that crosses on the sides of small niches, which are decorated with triangles around them; represent Jesus as well as the holy bible. The three figures of triangular shaped trees and the heads of the lances are hard to understand. It is still not clear whether they are in fact depicted as "Deesis" (Jesus situated between virgin Mary and John the Baptist) or "Transfiguration" (Jesus situated between Moses and Elijah).

Snake or Serpent Church is located just opposite of St. Barbara Church and has a rectangular plan, with an eleventh-century origin date. Interesting paintings can be seen on the left wall that depict fighting Saint George and Theodore with dragons, as well as depictions of Saint Helena and Constantine holding crosses; also visible are images of saints Onuphrius behind palm trees and Saint Thomas and Basil. Though this church is small, probably not finished, it does have interesting paintings throughout which makes for a worthwhile stop to admire those artworks. 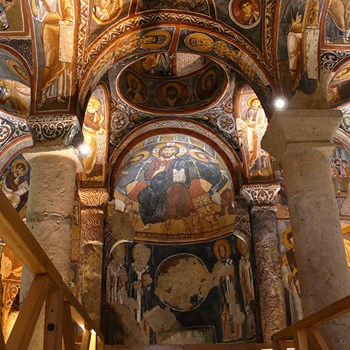 Dark Church is undoubtedly best-protected church in Cappadocia and certainly one of the best in Turkey. This church, called Dark Church because it gets very little natural light from its small window near the entrance, still has vivid colors due to its lack of exposure to extreme weather such as rain or snow. Thanks to this limited exposure, paintings have been remarkably preserved for centuries. There are a lot of depictions from The Bible such as: Deesis, Annunciation, Journey to Bethlehem, Nativity, Adoration of the Magi, Baptism, Raising of Lazarus, Transfiguration, Entry into Jerusalem, Last Supper, Betrayal of Judas, Crucifixion, Anastasis, Women at the Tomb, Ascension,the Hospitality of the Prophet Abraham, Three Young Men in the Fiery Furnace and portraits of the saints.

Carikli Church has two floors and the first floor features a dining room section with an engraving of The Last Supper on the wall behind. On the second floor, there is a church area that dates back to 13th century. Above this main dome, Jesus Pantocrator can be seen holding his hands aloft while four figures are seated below him (Matthew, Luke, John and Mark). Three of the angels (Michael, Gabriel and Uriel) figures are drawn in the other three domes. In the middle dome where the Angel Gabriel is seen, there are scenes of Jesus heading to Golgota and the raising of Lazarus. In the central apse, a well-preserved figure of the Deesis is seen. The words " I am the light of the world, who follows me will not be left in misery" are seen in the figure of Jesus in which he is depicted holding an open book. Around the altar, five Christian saints (Blaise, Gregory Nazianus; Basil; Chrysostom; Hypatios) are depicted.

Tokali Church is one of the oldest and most beautiful churches in Cappadocia, with four sections: the old church, a new chapel, lower church (cemetery) and storage. The paintings on the old church date back to 10th century BC The most interesting point of this section is that entire life of Jesus has been depicted chronologically. Starting from left to right and moving from panel to panel (3 on each side), you can see following paintings: Annunciation, Visitation, Proof of the Virgin, Journey to Bethlehem and Nativity, Adoration of the Magi, Massacre of the Innocents, Flight into Egypt, Presentation of Jesus in the Temple, Killing of Zacharias, Pursuit of Elizabeth, Calling of St. John the Baptist, Preaching of John, John meeting Jesus, Baptism, Marriage at Cana, Miracle of the Wine, Miracle of the Loaves and Fishes, Calling of the Apostles, Healing of the Blind Man, Raising o Lazarus, Entry into Jerusalem, Last supper Betrayal, Jesus before Pilate, Way of the Cross, Crucifixion, Descent from the Cross, Entombment, Women at the Tomb Anastasis, Ascension.

Most historians and archeologists believe that this section of the church was utilized as a school to teach Christianity. When the Bible would have been read, these children instead learned religion by visualizing their stories in the church.

The New Church is the only one in Cappadocia where you can see light blue colors in its frescoes, which are coming from Lapis Lazuli stone. This stone was traded through Afghanistan on Silk Road and has been used here at this place of worship. The Church is dating back to the last decade of the 10th century and the first decade of 11th century. There are many paintings from the life of Jesus, as well as some stories about St. Peter in a more modern style.

If you have any inquiries, please feel free to send us an email at [email protected] and we will get back to you as soon as possible.