The Malabadi Bridge, spanning the Batman River near Silvan in southeastern Turkey, was commissioned by Temür-Tash of Mardin, son of Ilghazi and grandson of Artuk Bey. A construction date can be found on a commemorative inscription carved at the bridge's eastern end as 1155. 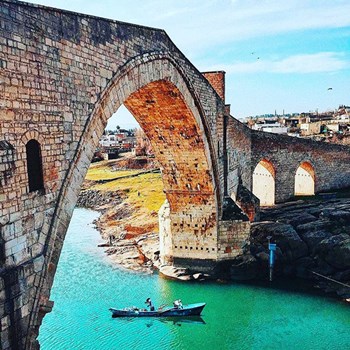 The Malabadi Bridge is the longest stone arch bridge in the world, measuring 40.86 meters across at its pointed arch, and it is 281.67 meters long with a width of 7.15 meters and height up to its keystone of 24.50 meters above water level; five arches are found in this bridge: one main arch at the middle, two side arches on each bank. The approach road is at an angle to the river so that there are five breaks along the arc. The main span of the bridge is a pointed arch which crosses perpendicular to the river with two sides of it elevated 1.20 meters high above the deep part of its bed.

The bridge was restored between the late 12th century and early 20th century. It had historically been the only bridge across this river, and it was in continuous use until a new road bridge upstream opened in 1950s, when the older one closed to automobile traffic.

The Malabadi Bridge is an engineering and architectural masterpiece of the 12th Century that's both historically, symbolically, and aesthetically significant. It is one of the most perfect examples to represent mankind’s efforts in overcoming obstacles through its engineering and design. In 2016, Malabadi Bridge was inscribed in the Tentative list of World Heritage Sites in Turkey.