Kizilirmak Delta Wetland and Bird SanctuaryPlaces to Visit in Samsun

Kızılırmak (River) is the longest river that rises from within Turkey and also flows into it, with a drainage basin making up the second largest percentage of Turkey. The Kızılırmak covers 1.355 km while also flowing through Sivas, Kayseri, Nevşehir, Kirikkkale, Çankiri çorum and Samsun Province in Middle Anatolia before eventually meeting its end at the Black Sea with an alluvial delta system as the most crucial part of South Black Sea Basin’s delta and wetland ecosystem.

The Kızılırmak Delta, with its high diversity of aquatic organisms and varied flora and fauna, presents a level of ecological union rarely seen in other wetlands. 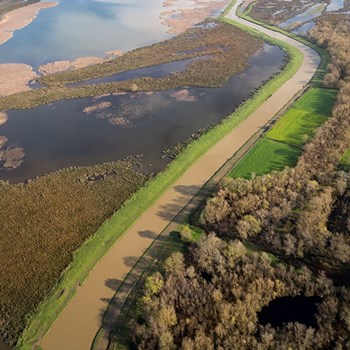 The habitats in the Kızılırmak Delta that are sea, river, lake, marsh, swamp, meadow, pasture and forest create a rarely seen visual feast. In addition to rare bird species, the area in which many different images and landscapes form attracts those who want to immortalize the moment by taking pictures of this beautiful habitat at a variety of times. The visitor center and bird watching house during migration, create an unforgettable moment for nature and bird lovers, who enjoy the opportunity of a one-time watch on all the components of this protected natural environment in company with an unusual visual feast.

The Kızılırmak Delta is one of the 422 Important Bird Areas that are accepted under threat worldwide. It is one of the rareliving wetlands with its various habitats and rich biodiversity in the world.

In 2016, Kızılırmak Delta Wetland and Bird Sanctuary has been added to the Tentative List of UNESCO.