Rock Tombs of Pontic KingsPlaces to Visit in Amasya

The Tombs of the Kings of Pontus, composed of tombs in varying sizes set throughout a royal necropolis, are located in Amasya, northern Turkey. The site was added to the tentative list in the cultural category of UNESCO World Heritage Site on April 13, 2014. 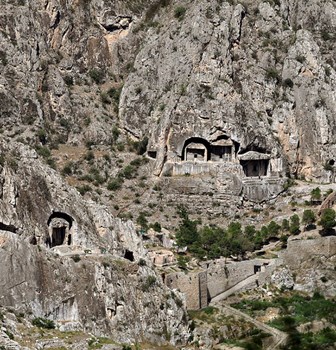 The Royal Necropolis was built after Mithridates I established the Kingdom of Pontus in 281 BC. The burial site is where monumental tombs are carved from limestone rock and located on a hill north of Amaseia, current day Amasya, and the river Yeşilırmak. Tombs containing big stone chambers lie inside the valley. The area is called as "Valley of the Kings" in respect to its status as northern Anatolia's largest kingdom during the Hellenistic period. Five king tombs in the "Maidens' Palace" area belong to Mithridates I, Ariobarzanes, Mithridates II, Mithridates III and Pharnaces I. The total number of royal tombs carved into rock around Amasya comes to 21.

The rock tombs are 8 to 15 metre (26-49 foot) high. Three of the five tombs have separate staircases leading up, with the other two accessible by a tunnel and steps.The five tombs are all accessible by ladder due to their height, and each has columns in the front facade. Three of the tomb’s fronts have six columns, one has four, and both with two. There are three tombs with a column and two without. The one known to belong to Pharnaces I is 15 m × 8 m × 6 meters. Above the rock-tomb, an inscription reads "the phrouarch (commander of the castle) Metrodorus dedicated an altar and a flowerbed for king Pharnaces I, to all gods".