Ismail Fakirullah Tomb and the other two structures linked with the Light Refraction Mechanism are in Aydinlar (Tillo) District of Siirt. After Ismail Fakirullah's death, a student of his, Ibrahim Hakkı, erected the Tomb in the 18th century.

The tombstones date from the 1800s. Because of incorrect restoration efforts in 1963, it has lost some of its authenticity. Ismail Fakirullah Tomb is made up of two rooms and a hallway with one big and two small domes, as well as a tower. The Tomb has a square design covered by a dome that transitions to the dome through squinches.

The entrance portion of the tomb has a square shape covered by a dome and leads to the main section, which also has a square shape. The interior parts of the tomb are unadorned in terms of decoration and include other tombs besides Ismail Fakirullah's. Nearby is an octagonal tower with a 10-meter height. 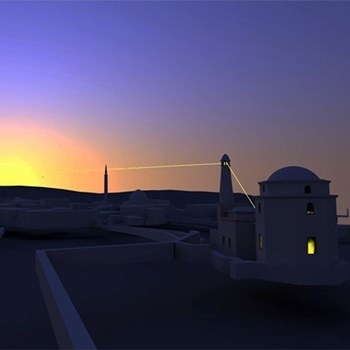 The tomb, tower, and light refraction mechanism are all significant in conjunction with the Kalet'ul Üstad (a wall built of rubble, undressed stones of various sizes without any binding substance), which is located on a hill overlooking the Botan Valley 3-4 kilometers east of Tillo.

Every year on 21st March (Nevruz – inscribed in 2009 on the Representative List of the Intangible Cultural Heritage of Humanity) and 23rd September, the first light of the rising sun is reflected to the reflector precisely embedded in Ismail Fakirullah's tower, and from a mechanism in his tower, highlights the grave of Ismail Fakirullah. The lightning starting from the lower left part of the grave continues for approx. 6 mins. In the first 3 mins., the grave is completely highlighted from the light reflected through the tower and in the remaining 3 mins. the light fades away in the opposite direction from the upper part of the grave.

The Ismail Fakirullah tomb and its light refraction mechanism are a testament to a long-standing spiritual and cultural heritage that has endured for many centuries. The Sufi belief is transmitted through this mechanism, which emphasizes the grave of Ismail Fakirullah on the 21st of March, which is thought to be the start of a new year among several people and communities in the region.

Ismail Fakirullah Tomb & Its' Light Refraction Mechanism has been listed in the Tentative List of UNESCO in 2015.