Hacibektas Town and the museum is about 45 minutes away from Nevsehir, located in the northern region of Cappadocia on the way to Kirsehir. It is home to Bektasi Sect of Islam and was founded by Haci Bektas-i Veli in the 13th century. You can visit a preserved dervis dergah (lodge), Cilehane (suffering house) and Bestaslar (five stones) when you are there, as well as an old Cemevi.

If you plan on visiting during August, you will be able to watch the international commemoration ceremonies and learn about the living traditions of the order’s followers. Every year on August 16-18th, tens of thousands of people flock here from Turkey as well as other Balkan countries including Bulgaria and Albania. Although only closely related historically, there is strong devotion in Hacibektas for all Alevi followers regardless of their ethnic background. There are many cultural gems scattered throughout this sacred site that await discovery. 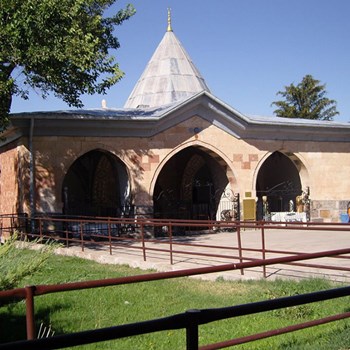 Hacibektas Dergah (Lodge) in the center of the town became a museum in 1964. The entrance leads into a large courtyard, to the right of which once stood buildings accommodating the dervishes who worked the land and farm laborers employed by the lodge.

The buildings in this area were demolished when the lodge was converted to a museum, and a wall was built here. At the end of this wall is the Ucler Fountain symbolizing the Creator, Muhammed and Ali. An open space on the left used to be for guest's horses where there should have been stables, barns or other outbuildings behind it.

The second courtyard, which leads to the lodge's entrance, is where you can drink holy water from the Lion Fountain. This fountain was imported from Egypt and donations were made to bring it into the lodge in 1853 as a gift. The second courtyard also has many other amenities including asevi (refectory), pantry, hamam (baths), guest house, hall where the sacred services known as cem was held, and the pavilion where the lodge's leader, the Dedebaba, received guests.

The final gate leads into the third courtyard where the tomb of Haci Bektas Veli stands. To the right are graves for dervishes who belonged to the lodge, as well as in front of them is a small mausoleum containing Balim Sultan and Kalender Sah. Visitors frequently stop at this location to view an ancient wishing tree.

Before entering the mausoleum, visitors traditionally bear-hug a marble pillar in the corner. If they can embrace it with two arms, then they are deemed pure of heart and intent. The tomb was built by Seyhsuvar Ali, lord of the Dulkadirogullari principality, following Balim Sultan's death in 1519.

Cilehane is a cave, located 3km east of town, that was used by Haci Bektas-i Veli*, according to some. It is said that those who walk through the hole in the rock will be purified of their sins. There are many attractions in Cilehane, including the Haci Bektas-i Veli, Yunus Emre, and Ozanlar (Bards) monuments, as well as a theater seating 5,000 people. The tomb of Mahsun-i Serif is also there - he died recently and is an important Turkish poet and composer.

This site is located five kilometers north of Civril, and it consists of a group of five enormous stones. According to legend, these are the rocks who came to witness that Haci Bektas-i Veli was telling the truth. Legend also tells about other Turkish legends in Cappadocia such as those about Haci Bektas.