Eşrefoğlu Mosque is located 100 meters north of the Beyşehir Lake in Konya Province, Turkey. During Seljuks of Rum's last years, various governors enjoyed a limited independence. The governors established semi-independent principalities named Beyliks in Anatolia. One such principality was that of Eshrefids who ruled from 1280 to 1326 who ranged about central west Anatolia.

After 1288, Süleyman Bey, the second bey of Eshrefids rebuilt the city of Beyşehir as a capital of his beylik. Although his beylik was relatively unimportant politically, the city flourished as one of Seljuk world's cultural centers. In 1296 he commissioned a mosque in Beyşehir and then died in 1302; he is buried next to it. 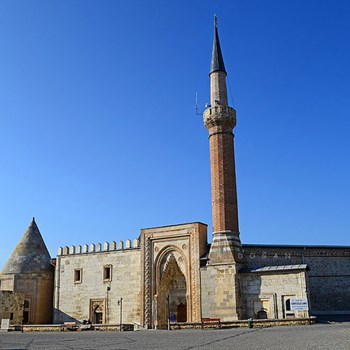 After seven centuries, Esrefoglu Mosque has been preserved and it continues to be used for regular services. The wooden columns are made of cedar and based on oral tradition they were soaked in a nearby lake for six months before being utilized in the building. In the center of the mosque there is a snow pit. Up to relatively recent times (1940s), the pit was used to be filled with snow from mountains near by. This snow both cooled down the mosque during summers and supplied enough moisture to infrastructure made out of wood.

On April 15, 2011 the Esrefoglu mosque was included in the tentative list of UNESCO World Heritage Sites. The justification for its inclusion is that "Esrefoglu Mosque includes all the main elements of early Anatolian Turkish architecture." It's an impressive building and is the largest wooden columned mosque surviving in the Islamic world."