Topkapi PalacePlaces to Visit in Istanbul

Topkapi Palace served as the home of the Ottoman sultans and their court until the middle of the 19th century. Initially constructed between 1460 and 1478 by Sultan Mehmed II,the conqueror of Constantinople, and expanded upon many times throughout its long history, Topkapi Palace served as not just a dwelling for Ottoman rulers but also an administrative hub. In fact, the palace was a small city in its own right, complete with administrative offices and several courtyards. 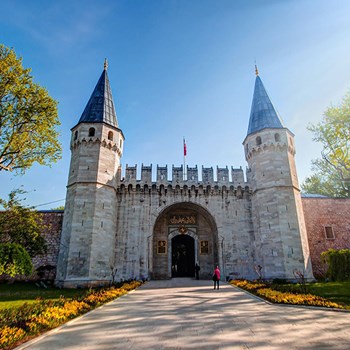 In the early 1850s, the palace became unsuitable for state ceremonies and protocol, so the sultans relocated to Dolmabahçe Palace on the Bosphorus. Even with this move, though, important treasures of royalty - The Holy Relics of Prophet Muhammad's possessions and The Imperial Archive would continue being preserved at Topkapi.

After the Ottoman Empire was dismantled in 1922, Topkapi Palace became a museum on 3 April 1924 when it was handed over to Mustafa Kemal Ataturk.

On display is the imperial collections of crystal, silver and Chinese porcelain; open to the public are also items from the sultan's family wardrobe including dresses, turban and jewellery. Adjacent to this area is where a famous diamond in the world, albeit one over six hundred carats larger than any other known so far with its name preserved as "Spoon-seller Diamond", can be seen sitting on a special showcase. The museum unfolds into rooms exquisitely decorated with fine tiles which offer glimpses at historical pieces showcasing craftsmanship that reached new heights in some periods.