Lake Tuz is the second largest lake in Turkey with a surface area of 1,665 km2 and one of the world's largest hypersaline (water that contains significant concentrations of sodium chloride or other salts) lakes. It is located 105 km (65 mi) northeast of Konya, 150 km (93 mi) south-southeast of Ankara, and 57 km (35 mi) northwest of Aksaray.

The lake, found in the central plateau of Turkey and fed by two major streams as well groundwater and surface water is not drained out. Brackish marshes have formed where channels and streams enter the lake; arable fields surround the area except in a southern region containing extensive seasonally flooded salt-steppe. 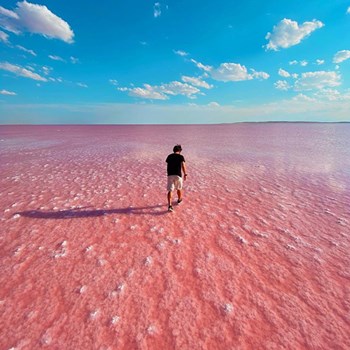 For most of the year, it is very shallow (approximately 1 foot deep). During winter part of the salt is dissolved in the fresh water that is introduced to the lake from precipitation and surface runoff. This mechanism is used as a basis for the process of salt mines. The three mines operating in this Lake produce 63% of Turkey's consumption needs and generating industrial activity around these mines related to processing and refining salt.

In 2001, Lake Tuz was declared a specially protected area and all of the lake's surface and surround steppe were included in this protection. The main Turkish colony of greater flamingo is present on a group of islands in area near the south end of the lake. Greater white-fronted goose is also a common breeder at Lake Tuz as well as lesser kestrel which breed locally around villages close to the water.

Plan for lots of walking where it can be hard to stay dry. You may get wet up to your ankles at the point you meet with the water, but prepare for a journey along the length of the lake which will include taking photos on frame at every opportunity.

One of the reasons why the lake has a tile-colored and white color is because of algae. You can also see different kinds of algae that gives the color of blue or pink in some parts of the lake. Especially, the pink colored parts of the lake offer breathtaking photo opportunities, but it does not always happen.

Wait ahead of time to enjoy the sunset from Salt Lake. The colors will be beautiful and it creates a different atmosphere.