Founded in 693 BC, Phaselis was an important port city throughout history. It is recognized because its rich historical past includes ruins from the Roman and Byzantine eras along with remains of a theatre, aqueducts, agoras and baths.

A visit to the ancient city of Phaselis begins with a stroll on the warm, sandy beaches which line the bay. The cloistered harbor is lined by pines and cedars, offering shade from even the hottest summer suns. One landmark in particular - a well-preserved theatre - is open for evening performances during September's Arts 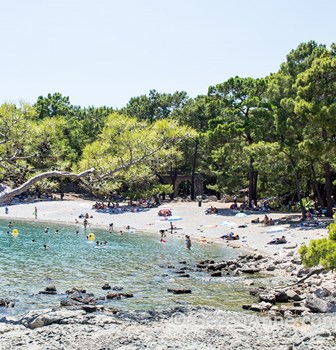 Phaselis is a natural harbor with formerly flourishing ancient ruins. The town would be worth visiting for the historical atmosphere alone, but it has become much more popular as an alternative holiday destination because of its close proximity to the sea.

Phaselis became one of the most important cities in the Lycian Union. The settlement was established before all other port cities, which ensured its rapid development and prosperity with trading activities. As farming diminished following weakening of the Lycian Union, piracy overtook Phaselis as well as other ports in region until Roman Empire intervened to bring stability through Ancient Rome's influence that dominated the south eastern Mediterranean. In the Byzantine period it became a bishopric, and it retained its importance until the 3rd century AD when is declined.

Phaselis, which was under Byzantine rule in the fifth and sixth centuries, was abandoned from 12th century onward due to damage incurred during the siege of Seljuks.The remnants of the ruins are primarily from the Roman and Byzantine periods. They line both sides of a main axis that connects to north-south ports, with steps providing access to the theater and acropolis at each corner. The theater is a typical small size Hellenistic period theater.

Phaselis is often confused with a city of Lycian or Pamphylian origin. In reality, Phaselis's geographic location suggests that it was an important port city.

The ancient city of Phaselis, which was included on UNESCO's Tentative List in 2009, is one of Turkey's outstanding universal values.