Historic Town of MudurnuPlaces to Visit in Bolu

Mudurnu is a small town and a district of Bolu Province in the Black Sea region of Turkey, approximately 52 kilometers south-west of Bolu.

According to Strabon, Modrene (Mudurnu) was located on the primary trade routes of Anatolia. The Silk Road, which connected inner Asia with Tabriz in the 13th and 14th centuries, passed through Bursa and continued via Erzurum-Sivas-Mudurnu-Göynük-Taraklı-Geyve to Constantinople.

The Crimean Road linked Damascus and Mediterranean seaports with Bursa, proceeding to Constantinople and the Black Sea through Mudurnu-Bolu-Kastamonu-Cide during Byzantine times. Overlooking the junction of these roads, Mudurnu served as a vital military station and mid-sized commercial center in Byzantine, Seljuks, and Ottoman periods.

Mudurnu has played an important role in three ‘periods of foundation' that were crucial phases in the formation of the Turkish states in Anatolia. The start of Turkification in Anatolia is known as the "First Period of Establishment." Osman I, who followed in the footsteps of the Seljuks, launched Ottoman invasions in Mudurnu. In 1307, under Osman's son Orhan, Mudurnu became a city within Ottoman territory, thus becoming part of the Ottoman heartland.

The Ottoman Interregnum (1402-1413) was the second period of establishment, during which Mudurnu served as a refuge for crown princes fleeing Timur's forces. Çelebi Mehmed established his camp on the mountains of Mudurnu-Seben and oversaw the commencement of the second Ottoman reign. 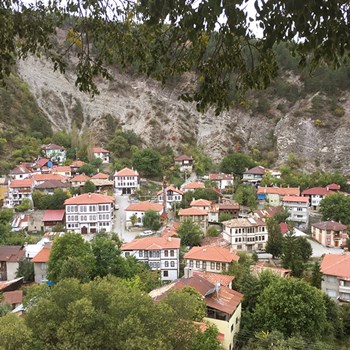 The Turkish War of Independence, which lasted from 1919 to 1922, resulted in the creation of the Turkish Republic. The most tumultuous rebellions against the National Resistance were put down in Mudurnu during the struggle between Sultan and Atatürk's new Ankara government. Since then, Mudurnu has been one of Turkey's foremost advocates for republican ideals.

The Yildirim Bayezid Mosque in Mudurnu, which was constructed by the then crown prince Bayezid I in 1382, is one of the Sultan-built mosques. The mosque is one of the first examples of a simple execution of the single-domed mosque plan layout within the context of Ottoman architectural progress. Furthermore, because to its large dome diameter and wide dome, it serves as an important link in the transition from small domes to larger ones during the Ottoman Empire era.

The Ahi order, which played an important role in the economic life of the Anatolian Seljuks and has since become a symbol of Turkish ethics, is unique to Turkey. Mudurnu is the only district-level urban center in Turkey where the Merchants' Prayer, a quintessentially Ahi custom, has been performed continuously without interruption for more than 700 years, and the "Ahi Culture Week" is officially recognized and celebrated.

Mudurnu was an important figure in the development of Turkish states in Anatolia, particularly as a center of education for Ottoman crown princes. Through the Çandarlı Vizier dynasty, which helped establish early Ottoman state institutions, he played a key role in the founding of the Ottoman state.

Historic Town of Mudurnu has been added to the Tentative List of UNESCO World Heritage Sites in 2015.