Yivli Minaret Mosque is located in the historical peninsula of Antalya known as Kaleici. The Yivli Minaret, which literally means 'fluted minaret' is adorned with dark blue tiles and a landmark and symbol of the city. Although the inscription at the entrance claims that Yivli Minaret Mosque was erected in 1373 by Mehmet Bey, grandson of Yunus Bey from the Hamitoglu clan, it was originally constructed in 1230 using the foundations of an ancient church that had previously stood there. 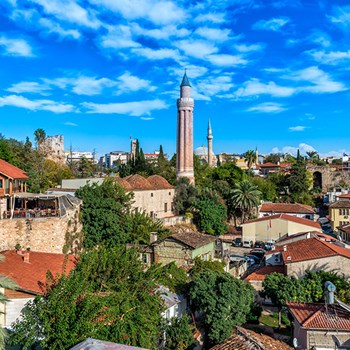 The original mosque was destroyed in the 14th century, and its prayer hall was rebuilt with six domes. The exterior tiles of the domes attract attention. This is one of the earliest examples of multi-domed mosques in Anatolia, having a rectangular plan scheme and simple decoration style. The mosque has 12 columns with ancient column heads that support the roof. Exterior walls of the mosque are made of cut stone.

The mosque is notable for its minaret, which was erected under the orders of Alaaddin Keykubad I, the Seljuk sultan who ruled from 1220 to 1237. The fluted 38-metre tall minaret is a one-of-a-kind example of Anatolian Turkish architecture. It is built on a huge 6.5 meters long and 5.5 meters wide stone base. The Minaret's eight semi-circular grooved red brick shaft was originally adorned with dark blue and turquoise tiles.

The Yivli Minaret Mosque, with all structural components, is a great example of Anatolian Turkish Architecture. In the Middle Ages, Turkish architects created minarets in various shapes, such as spiral or grooved. But the Yivli Minaret distinguishes from the competition with its tall fluted form and unusual shape. It is so distinct that it has been called "the symbol of Antalya."

Yivli Minaret Mosque is listed in UNESCO Tentative List since 2016.