Located between Kaş and Demre districts, 195 km southwest of Antalya, ancient Simena is now known as Kaleköy. This Lycian coastal city was inhabited from the fourth century BCE to present day. The only ruin that remains intact is a castle that offers the best views of Kekova and its surroundings. The Kekova region comprises the island of 7.4 kilometers and 500 meters away from shore, right across Simena, ­Simena (Teimiussa), Aperlai Pier (Sıçak İskelesi), Aquarium Bay (Akvaryum Koyu) and Gökkaya Bay (Gökkaya Koyu).

The northern shore of Kekova Island (Kekova Adası) overlooking Simena is full of traces of the civilizations that was submerged in ancient earthquakes. Whether it be stone stairs, house ruins, pier ruins, or half in and half out on a rock extending into the depths 4-5 meters in sea water, you can see reminders of what used to be. Simena is located on the opposite side of Kekova Island and accessorized with various parts from its deep past like a road perched among small islands. 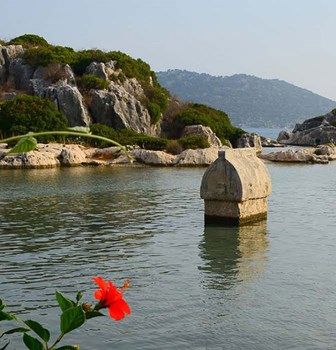 Simena, an ancient Lycian sunken city located in Kekova Bay in south-west Turkey, is often referred to as the sunken city of Simena. Simena was once a small fishing village and later became home to the Knights of Rhodes (formerly John’s Knights).

The ancient city of Simena was once made up of two parts: an island and a coastal part on the mainland. Kaleköy, or "castle village", is located on the mainland where fishing boats and structures peacefully coexist with ruins from many eras.

The top of the village is dominated by a well-preserved castle built partially on ancient Lycian foundations. Inside the castle is the smallest amphitheatre in Lycia, and at the eastern end of the village, there’s a necropolis with some nice sarcophagi overlooking the sea surrounded by old olive trees. .

Near the harbor of Kaleciköy is another ancient sarcophagus that's popped up from the water. Across the bay, along the island are some half submerged ruins of Simena, an old town from 2nd century AD due to terrible earthquakes. Half of the houses are underwater as well as steps leading down into it. You can also see foundations and old ports below sea level too.