The Ivriz Cultural Landscape & Rock ReliefsPlaces to Visit in Konya

Ivriz is a rural place in Konya province, located 170 kilometers south-east of the city. The village is located on the slopes of Mount Bolkar, which forms part of the Taurus Mountain range's middle section. Ivriz is also situated within sight of the wetlands and streams fed by the Ivriz Creek, which runs to the north-west.

The Ivriz Cultural Landscape, located in southwestern Turkey, comprises two towering Neo-Hittite rock carvings as well as a tiny Neo-Hittite altar, as well as a monastery from the Middle Byzantine Period, two caves and natural features like springs. Over a long period of time from the Late Bronze Age (1650-1200 BC), through Iron Age (1200-650 BC) and down to the Middle - Late Byzantine period (843-1543 AD), the site was used as a border marker and religious and cultic area.

It was referenced by the Hittites in the Late Bronze Age, and it was an important border marker throughout the Iron Age. It became a major water cult sanctuary during the Iron Age, and it continued into the Byzantine Period where it was used as a religious setting for an important monastery.

The relief is 4.2 meters tall and 2.40 meters wide, carved on a hillside of one of the rock outcrops. It depicts Warpalawas, king of Tuwanuwa, together with the Luwian weather god Tarhunzas, who can be identified from the inscriptions on the monument. There are three inscriptions on the relief. The first is in front of the head of the weather god, the second behind the king, and the third at the bottom in a tiny cavity where a dedication of the artist is inscribed. The weather god, who holds a wheat bundle with his left hand and grapes with his right, is shown in the middle of the relief. He bears grapes and grape leaves on his belt, representing fertility in the valley. A grape plant's limb hangs behind him. 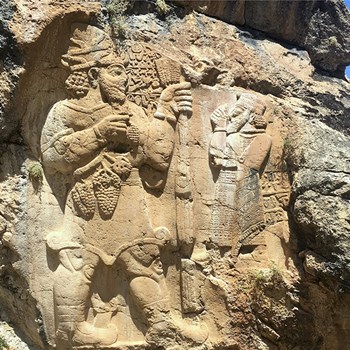 Tarhunzas has a beard and curly hair. He's wearing a helmet with horns, which is the Hittite tradition. His hair and beard are shown in the Assyrian or Aramaean style, according to Assyrian or Aramaean art. Warpalawas is standing in front of Tarhunzas; he is depicted as being smaller than the god and holding both of his hands up while wearing a round decorated hat and a long embroidered robe with a fibula attached. Previously, a spring stood in front of this relief; but today the water from this location is gathered via basins and channels of the Ivriz water dam.

A second Neo-Hittite rock relief is located 7 kilometers south of Ivriz Village in a dried out river bed in a narrow valley of the Taurus Mountains, and is known as Ambarderesi. The Sannabadae Monastery (also known as the Palace of Girls and Boys), which lies across this relief, is a Byzantine monastery. The monastic complex continues on both sides of the narrow valley. In 2015, a scrap of an inscribed stele with Luwian hieroglyphs was discovered near Ambarderesi, which is extremely significant since it implies that inscribed steles were positioned in front of the monument at Ambarderesi and part of a large water sanctuary. Ambarderesi depicts a scene that is very similar to the Ivriz Relief, but it has been exposed to much harsher weather conditions. This iconography is also a symbol of fertility, in addition to representing the manifestation of power and cult.

The Hittites carved reliefs on important roadways and at key entrances, allowing districts to communicate with one another. It may be concluded that the location was an important border marker and a religious center because it is mentioned in the Hittite treaty.

Ivriz Cultural Landscape has been added to the Tentative List of UNESCO in 2017.