Akdamar Church or The Church of the Holy Cross is located on Akdamar Island in Lake Van. The church is within the borders of Gevaş District, which is part of the province of Van. Lake Van has 4 islands that offer breathtaking views for visitors, but Akhtamar, also known as Aghtamar or Ahtamar, is considered to be one of the most beautiful and historically important among them all.

The Akdamar Church was built between 915 and 921 AD by Armenian Architect Bishop Manuel, under the supervision of Gagik I Ardzruni, an Armenian King who reigned over the Kingdom of Vaspurakan. The first information about construction on the church is written in Thomas Ardzruni's 10th-century chronicle. The construction date also coincides with markings inscribed on the west façade that read "915 AD". 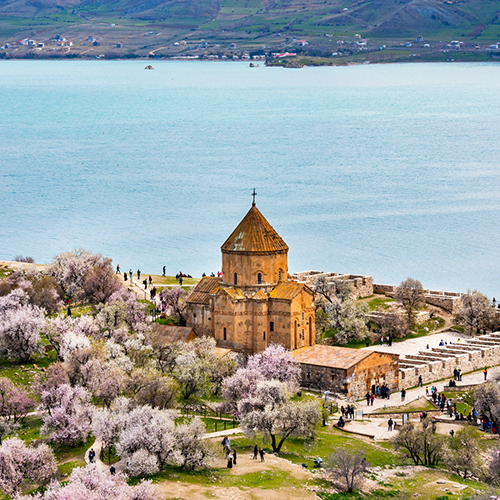 Akdamar Church, which is thoroughly reflective of the different faiths in Vaspurakan Kingdoms and their relationship during the 10th century with its architecture and decorations, has a significant place in world history.

A unique aspect of the decoration of Akdamar Church is its rich figural reliefs which surround the interior in bands or bordures and decorate the lower part of walls with sculpture-like large size figures. Manuel not only wrapped the church’s exterior with friezes, but did so in order to fuse sacred and profane images into a new royal iconography intended to enhance the political legitimacy of the realm.

Akdamar Church has amazing reliefs on its’ walls which include lots of stories from The Old Testament and lots of creatures. The church has some frescoes inside, but unfortunately they are not in a good shape. The interesting point about the frescoes is the look of the people. The frescoes have very different depictions of Jesus compared to the other churches in Turkey. The church was a very important Armenian church until recently and it has been restored by the Turkish Government. It is one of the most beautiful artifacts of Armenian architecture surviving in Turkey. The church is now closed for rituals, but it is possible to have some praying in the church with special permissions.

Akdamar Church has been added to the Tentative List of UNESCO in 2015.