Odunpazarı, literally "firewood market" in Turkish, is one of the central districts of Eskişehir. During the Dorylaion War in 1097, I.Izzeddin Kilicarslan encamped in Odunpazari which later resulted in the establishment of a new settlement at Eskisehir, Turkey. The "Odunpazari Historical Urban Site" is located at the northern slope of a series of hills which makes it distinctive to other areas within Eskisehir that are all flat. 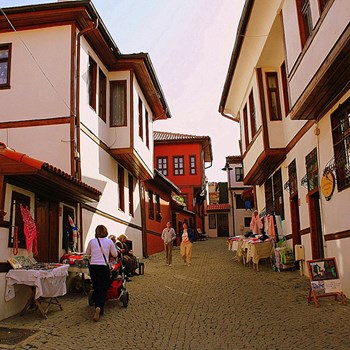 The traditional Turkish architecture of the konaks reflects family life and traditions from the past. Fountains are also another important source for establishing traditional patterns in Turkish neighborhoods and social relationships.

'Odunpazari Historical Urban Site' is one of the few examples in Turkey that have been built solely by Turks. It's an urban workspace with a great amount of preserved Turkish architecture and an open-air museum where you can view the traditional time-honored Turkish townquarter structure. One of Turkey's landmarks, Odunpazari Historical Urban Site, is on the Tentative List for inclusion in the World Heritage List.