Historic City of Harput and The CastlePlaces to Visit in Elazig

Historic City of Harput and The Castle

Harput was originally established as a castle city for protection and defense during periods of war, invasion, and confusion. It can be described as a natural fortress built on the side of a limestone mountain with craggy cliffs; this fortification served well over centuries in Urartu era before turning into a trade center.

Harput Castle has hosted many cultures in its history, including Urartu, Byzantine, Artukids, Seljuks and Ottoman. A 17th century Ottoman Quarter is known to exist on the site as well as water cisterns, dungeons and inner fortress mosques. Remnants of the Artuklu Palace - hidden tunnels allowing passage outside - have also been preserved. One secret passage connects the castle and the Church of the Virgin Mary, while other historical sources provide that link to the Castle Bath and Inner Castle. Belek Gazi built this dungeon in 1123. 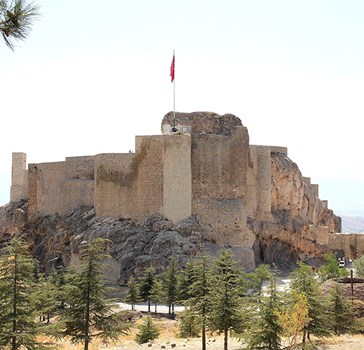 A relief found during afforestation work in the Harputta Nevroz Forests revealed history of Harput to be 2200 years old. In it, a storytelling expression style was used. The main subject is depicted as the conquest of a fortress and the arrival of prisoners before the king in a relief measuring 2.72 x 2.42 and processed on local sandstone rock.

Harput, because of its history and accommodating nature, has hosted many civilizations for thousands of years. One of the best examples of this is the Virgin Mary Church which still stands today. The church is one of oldest Christian churches in Anatolia, and construction date found on site indicate that it was built in 179AD. The Abgar Kingdom founded the Church of the Virgin Mary in Harput after assembling with Syriac Christians.

The entrance to the church is a sheltered, low structure, which was later added to the northern wall. This small addition contains some reclamation materials. The north wall of the church lies against old rocks and its west side is carved into natural rock. The plan runs on an east-west axis. In the eastern direction there is a 3-divisional apse.

The Church of the Virgin Mary is still active today and serves to Assyrian community. Besides, it is noted that the doors of church are open for everyone who looks for healing, because the belief that this church heals some mental health diseases is common. Every year on 15th August Asdvadzadzin (celestial ascension) festival takes place in it with an important ceremony.

The History City of Harput and the Castle was added to the tentative list of UNESCO in 2018.