Dolmabahce PalacePlaces to Visit in Istanbul

The Dolmabahce Palace was built between 1843-1856 by Karabet Balyan, the court architect of Sultan Abdulmecid. The palace is a blend of many European architectural styles and as a result it is considered to be one of the finest buildings in Istanbul. However, when it comes to palaces in Istanbul or all over the Ottoman empire for that matter, Topkapi Palace has always been by far their most important residence – until Dolmabahce Palace was completed. 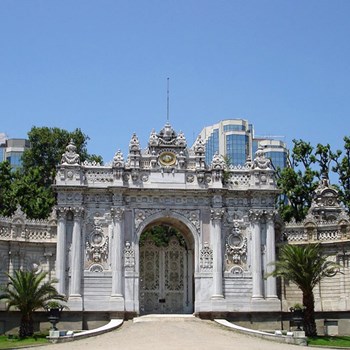 The three-story palace in Istanbul has 285 rooms, 43 halls, a 600 meter long quay along the sea and monumental gates. The entrance section of the palace was used for receptions and meetings of the sultans and behind it is where they kept their harem.

The palace has survived with its original decorations, furniture, and silk carpets. The walls and ceilings are covered in paintings made by famous artists of the age. Decorations include 40 tons of gold. All furnishings in important rooms are different shades of a single color. Ornate wooden floors have unique designs in each room and they’re lined with Hereke carpets - some of Turkey's finest examples of artistry.

The largest ballroom in the world with a 4.5 ton crystal chandelier and 36 meter-high domed ceilings, this space is used for important political meetings, receptions and balls. The hall was previously heated by an oven-like system under the floor.

During Republican rule, Ataturk often resided at this palace when he visited Istanbul. He died here in 1938 and before his body was taken to Ankara it lay in state where the public paid their respects.