İshak Pasha Palace is more of a complex than simply a palace. It is the second administrative campus after Topkapı Palace in İstanbul, and the most well-known of the palaces built lately. The Ishakpasha Palace, which was built on a hill at the side of a mountain 5 km. east of Doğubeyazıt District, is an example of 18th-century Ottoman architecture and is one of the largest such examples remaining in that period. 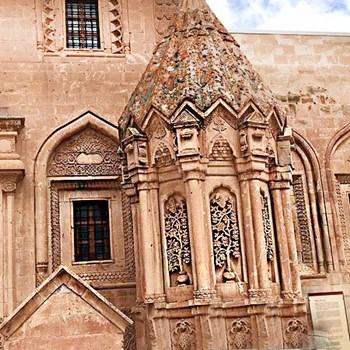 According to an inscription at the Harem Section's top, it was constructed in 1784 (1199 H.) according to the Islamic calendar. Visitors to the Ishakpasha Palace are impressed by the steep terrain, but they should know that there's a suitable flat area as well. There is an entrance door on this side of the palace, and it is situated on its narrowest facade. The palace's defense against attack is weak due to the age in which it was built, making its main gate susceptible. It has a neat stone texture with an old architectural style matching other buildings built in Turkey. The palace is divided into the following architectural styles: 1- Exterior façades 2- First and second courts 3- The men's quarter (selamlık) 4- The mosque building 5-The Soup Kitchen (Darüzziyafe) 6-Bath 7- Harem Section 8- Ceremonies Hall 9- Arch Gates 10- Panther Rooms and Ammunition Room 11- The Moosoleum 12- The Bakery, 13- Dungeons 14 - Interior design features (doors, windows, cupboards etc.)

The eastern portal of the palace, built with cut stone, reflects Seljuk art in its reliefs and decorations. The entrance to the palace is made of two courtyards, a "public" courtyard and an "enslaved" courtyard. The buildings around them are connected by halls that separate male from female quarters. There is a mosque in one corner near the mausoleum at the end of these divisions with a passage leading outdoors to the harem court behind sealed doors painted red. The mausoleum is built in the style of Seljuk "kümbet" architecture. The palace has two floors, each with a respective 366 rooms. Each room includes a stone fireplace and central heating system. The building’s reception hall is 30m x 3m (100ft x 10ft) and contains stone walls and flooring. The walls of the palace are decorated with verses from the Koran in ornate Turkish calligraphy. One verse says "Ishak, upon will, made the whole world a place of benevolence and for such efforts this date was marked as 1199 meaning 1784 in Gregorian calendar".

The mausoleum in the second courtyard of the palace is constructed from cut stone. This octagonal mausoleum, which reflects a typical Seljuk design, has two floors and pillars on its exterior decorated with geometric motifs. Çolak Abdi Pasha, İshak Pasha and their close relatives are all buried here. İshak Pasha Palace is an architectural wonder in all regards. It is difficult to argue against the palace as an entire construction, or on a room-by-room basis as each exhibits qualities that are great İshak Pasha Palace stands in a desolate valley today, but stories about the palace and various legends add to its magnificent aura.