The ancient city of Kibyra, in the Gölhisar district of Burdur, is known as "the City of Gladiators" and once was one of the most important cities in Lydian and Roman civilization. Located at an altitude of 1100-1300 meters with juniper and cedar forests covering it, the 2300 year old city can be seen from all parts because it's on hilltops that offer a view over its surroundings.

According to the records of the Amasian traveler Strabo, the people of Kibyra were originally Lydians and migrated from here to the Kabalis region. Soon they changed their settlement areas and established a city with a circumference of 100 stadiums. The archaeological monuments and resources of this city were excavated in 2006, revealing a militaristic character with over 30 thousand infantry and more than 2,000 cavalry units. This is the place with the largest gladiator reliefs from ancient times in Turkey. 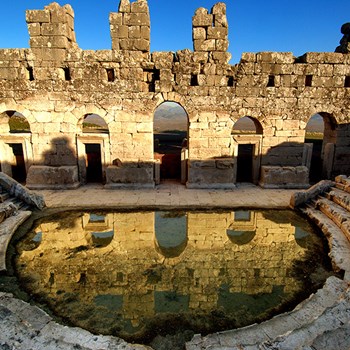 The strategic location of the city made it a regional center for justice, and its fame as a horse breeding town in ancient times has led to it being called simply "The City of Fast-Running Horses". The city had its strongest time in the Roman period, and all the architectural remains that can be seen today belong to the Roman Period.

After a great earthquake struck the city in 23 CE, Emperor Tiberius (ruled 14-37) brought amnesty and financial aid for 5 years. The people of Kibyran agreed to change their name to Kaesarea Kibyra in honor of his generosity. .

Designed with the Roman and Byzantine architectural tradition, The 9.000 seat stadium is one of the rare ancient stadiums that are found in Anatolia. There is also the a 4 functional odeion (music house) associated with an orchestra section covered by a mosaic titled Medusa which is unique in its kind in the world.

This site was included in the UNESCO World Heritage tentative list in 2016. Among the historic remains of this ancient city are its agoras, main street, large theater with a capacity of 9.000 people, and underground chamber tombs.

Stadium: When you enter Kibyra, on the left side we can see Kibyra Stadium, which is accepted as one of the five most magnificent stadiums with 200 meters of track length and capacity for 12 thousand people. The arena was primarily used for sporting events in its early iterations and was later modified to hold gladiator battles.

Theater: The ancient theater at Kibyras, with a seating capacity of 7-8000, is remarkable for its vertical and close proximity to the stage. The seats are completely intact today and can be seen in their original form.

The Odeon, a concert hall found in the ancient city of Kibyra, is the largest known odeon in the world. It was used to house musical and theatrical performances with a capacity for 3,500 spectators.

The Mosaic of Medusa: A mosaic made of marble, dating back to the 1st century and depicting Medusa, is unique in the world. The middle of this Kibyra Odeon has been "Opus Sectile" decorated with Medusa's multi-colored head, for centuries believed to turn anyone who stares at it into stone.

Bath: Kibyra's bath, which is thought to have a history of at least 1800 years as the third-largest building in the city after the stadium and odeon. The main structure has an area of 2,600 square meters with 5,400 square meters total. The heating system was designed to heat from the bottom marbles and among Anatolian baths the area it covers the largest area.