Karain CavePlaces to Visit in Antalya

Karain Cave, also known as the Karain Mağarası is a large natural cave located 30 kilometers northwest of Antalya within the province of Yağca Village. The height of the cave from its front to ground level varies according to distance and it ranges from 150 meters at its highest point in front all the way down to 430-450 meters above sea level.

Early in human history, the cave has been home to people during the Prehistoric Ages. These included the early Palaeolithic Age, Middle and Late Paleolithic Ages, Neolothic Age, Chalcolithic Age, Early Bronze Age and Classical Ages.

As a natural consequence of this, the cave features a thick cultural deposit of approximately 11 meters. The use of the cave in classical periods is mostly in the form of a votive cave (temple), and there are Greek inscriptions and niches on the mouth and outer walls. The archaeological findings obtained from excavations at Karain Cave are exhibited at the Antalya Museum (Antalya Mağarası) and Karain Museum (Karain Müzesi) located near to it. 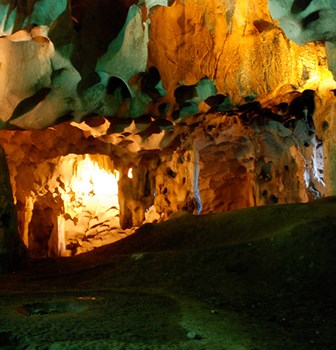 The entrance to the cave is located about 100 meters above a layer of travertine that was likely created during the Pleistocene period. The three main, spacious chambers are separated by walls of calcite and connected by narrow and winding corridors. The interior is decorated with stalactites and stalagmites.

Signs of archaeological work are visible on the surface of the cave. Hikers can see that a by-product of stone tools is still at the entrance to the cave, where recent excavation was conducted. However, you should be aware that the collection of such items is strictly forbidden and severely punished by Turkish authorities. Before entering the cave on the slope of a mountain, you’ll see various niches and Greek inscriptions- they are remains from a religious sanctuary during colonization.

Inside the cave, there’s a bunch of chambers and you can see how people lived here thousands of years ago. The advantages of these caves were numerous: not only could it keep cool in summer and protect from the elements in winter, but there weren’t any variance in temperature like outside either.

The plain at the foot of the mountain has long been used for farming, but in ancient times this fertile land was accessible only to hunters and gatherers. Even today it is clearly visible that this is an area intensively used for agriculture.

Moreover, because the cave is located on a steep slope, it provided excellent protection against attacks of enemies - the attackers were clearly visible for the inhabitants of the cave.

Karain Cave is listed in UNESCO Tentative List since 1994.