Gallipoli BattlefieldsPlaces to Visit in Canakkale

For foreign visitors, a visit to the Gallipoli Peninsula is usually done as a pilgrimage of remembrance and an effort to commemorate honor. The Allied forces who landed here in World War I were predominately fighting on the side of Britain, Australia, New Zealand, Indian troops and French troops. They arrived on April 25th 1915 with plans to attack the Ottoman Empire (fighting for Germany's side).

The brutal nine-month campaign, which the Turks finally won under the brilliant strategic command of army officer Mustafa Kemal (later to become Atatürk, founder of modern Turkey). The war resulted in more than half million dead people and more casualties. When the war ended, pine-covered hills were scattered with sobering memorials. 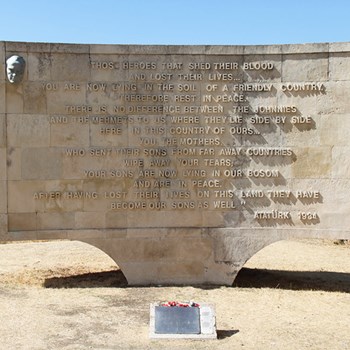 The Anzac Cove area (where the allies landed) has a commemorative monument and many cemeteries, while the Lone Pine Cemetery area, with the most Australian graves (where a 4-day battle left 7,000 dead), and up past Turkish Monument commemorating Turk's 57th Regiment to Chunuk Bair New Zealand Cemetery and Chunuk Bair Mehmet Memorials hold more important battlefields. Many visitors find that taking an organized tour of battlefields is worthwhile to help make sense of history.

The southern Gallipoli Peninsula is home to three memorials from the Gallipoli campaign. The village of Alçitepe holds many battle finds in the Salim Mutlu War Museum, with plenty of objects displayed; a Gallery of the Gallipoli Campaign that shows photos and dioramas illustrating the battles; and some Turkish, British, French cemeteries all scattered over to south. The Abide Monument at Morto Bay commemorates all fallen Turkish soldiers in Gallipolis.