The Turkish word 'Kariye' is derived from the ancient Greek word 'chora' meaning 'outside of or beyond the city (land)'. It is known that there was a chapel outside of the city before 5th century when city walls were built. 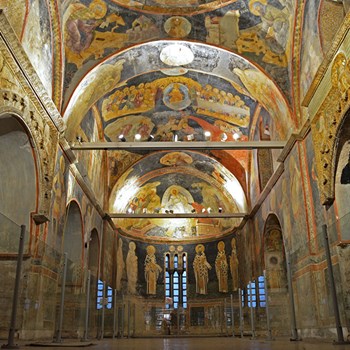 The first Chora Church was rebuilt by Justinianus (527-565) in place of this chapel. However, it was destroyed during Latin invasion (1204-1261). In 1328, Andronikos II repaired it due to admiration for its architecture and history as he had seen it while on a pilgrimage to Jerusalem.

The mosaics and frescoes of the Chora Church are the most beautiful examples from this period, with a distinctive style seen in their depth, movement, and elongated figures.

Following the conquest of Istanbul in 1453, this building served as a church. It was converted into a mosque in 1511 by Vizier Hadim Ali Pasha before its eventual conversion into a museum in 1945. In 1948-1959, while restoring and renovating the building, frescoes were uncovered on the walls that had been covered up during an initial renovation following its conversion into a mosque.