Termessos is one of Turkey's best preserved ancient cities and most outstanding archaeological sites, located in the province of Antalya.

The ancient city of Termessos is located on Gulluk Mountain in Antalya, Turkey. The striking ancient site is also called as the "Eagle's Nest" because its most notable feature is two peaks spread over a wide area with an altitude of 1050 meters. 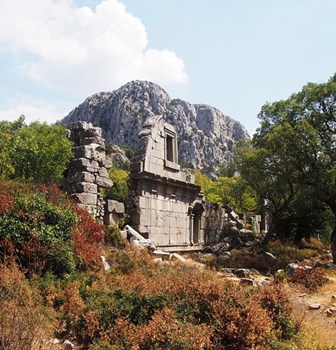 Termessos ancient city is among a great degree of the thick marquis and forest area. Remains include strong defence walls, temples, necropolis, agora, gymnasiums, bouleuterions and five water cisterns.The ancient theatre of Termessos is one of the world's most magnificent historic sites.

The people of Termessos, as noted in old inscriptions dating back to antiquity, identified themselves as the Solyms. The local language they spoke was a form of the dialect called Psidia known by many other communities throughout Anatolia, even before it became a major aspect of daily life at the ancient city.

Termessos is little known in history. The city came into the spotlight when Alexander the Great siege it around 334 BC and left without attacking its inhabitants. Evidence suggest that the King of Macedonia spared those brave people and moved on to invade other cities. Termessos enjoyed prosperity during Hellenistic, Roman as well as Christian periods and then we do not know too much about here. Termessos is famous for its acropolis and theater.

The archaeological site of Termessos, which was included on the UNESCO World Heritage Tentative List in 2000, is one of the outstanding universal values of Turkey.