The Galata TowerPlaces to Visit in Istanbul

Galata Tower, although the date of construction is not completely certain, is believed that Galata Tower was built in 507 AD during the Byzantine era.

It was originally known as the Christea Turris (Tower of Christ) by Genoese and Megalos Pyrgos (The Great Tower) by Byzantines. When it took on its present shape in the 14th century, during the Genoese period, it was heavily damaged during an earthquake in 1509 and renovated by Hayrettin who was famous at that time. Under Süleiman's reign (1520-66), prisoners sentenced to work at Kasımpaşa Naval Dockyard were held here. 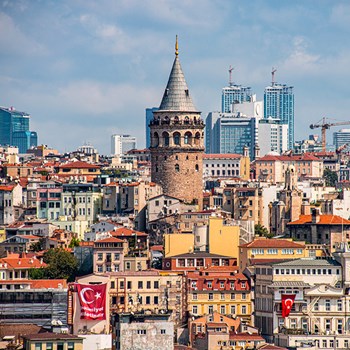 At the end of the 16th century, Takıyeddin Efendi established an observatory on top of this tower and began to observe for a time. He closed his observatory later under orders from Murat III (1546-1595).

Hezarfen Ahmet Çelebi flew as an early aviator using artificial wings from this tower across the Bosphorus to the slopes of Üsküdar on the Anatolian side during the reign of Murad V. Early in its history, it was used by Mehter Band, but after 1717 it became a fire-observatory tower and unfortunately was destroyed by fire in 1794.

During the time after Galata Tower recovered from fire damage, Sultan Selim III (1761-1808) added a cumba to the top of the tower. It was destroyed in another fire in 1831 and Sultan Mahmut II added two more floors atop the old structure and put a cloth on it resembling a conical hat as an addition to its design.

Anchored by a framework damaged during a torrential storm in 1875, the Galata Tower today operates as both an upscale tourism destination. While the elevator only goes to the 7th floor, visitors must make their way up its final two floors on foot. After exiting through the top-floor restaurant, there is an outdoor balcony that provides a breathtaking view of Istanbul and the Bosphorus.Dimensions