Anavarza is an ancient city located in the Cilician region, within the borders of Kozan. The city is on a hill rising like an island 8 km north of where Sunbas stream meets the Ceyhan.

The city's history is obscure before the Roman imperial period, but it was visited by Emperor Augustus in 19AD. Under his reign, the city became known as "Caesarea next to Anazarbus." The name Anazarbus most likely belongs to a pillar of rock that towers 200 meters and is one of the most striking physical features in Çukurova plain; an older name for this might have been Na-barza, from Old Persian meaning "Invincible". 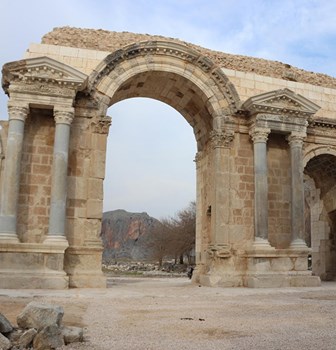 The peak of Anazarbos's heyday began in the middle of the 2nd century AD. After the end of civil war in Roman Empire at the end of that century, cities like Cilica Pedias (East Cilicia) were used to billet for Roman armies during their campaigns against Parths. Anazarbos thus became a city where Roman troops were supported logistically from time to time during their fighting against Parths.

The city of Anazarbos enjoyed prosperity during the first two centuries AD and, as a result, it came to be the most important city in its region. This prosperity was signaled by new architectural projects undertaken in the first half of 3rd century AD that raised monumental buildings in addition to necessary appearances from prominent emperors.

The city suffered earthquakes in both 525 and 561. It was rebuilt by the emperors of the period, Justinius and Justinianus. In the 7th-8th centuries, it was invaded by Arabs, changing between Byzantium and Arabs for successive centuries. The Arab invasion ended in 964 when Nikephoros Phokas seized it again within Byzantine boundaries.

The 11th century saw Armenians migrate to Cilicia Plain fleeing the battles with Alparslan. In 1375, after Memluks had gained control of the area, it was inhabited by Turks.

The Ancient City of Anazarbos is the birthplace of the world-famous pharmacologist Dioskurides, who served in the Roman army during Emperor Nero’s reign. His work, De Materia Medica, is one of the foundational documents studied in medical classes centuries after it was written and introduced 1000 medicines and their 4740 possible uses. Dioskurides was honored as one who has made a significant and enduring contribution to human knowledge, being a “Father of Pharmacology.” His book has been translated into Arabic, Syrian, Hebrew, Persian Spanish, Greek German English.