Mahmutbey Mosque is a historical mosque in Kasaba, a village 18 miles (11 kilometers) to the east of Kastamonu. The village used to be an important settlement in the history of Kastamonu Province. Nowadays, it's a small village that holds one of the province’s most valuable cultural sites: Mahmutbey Mosque. 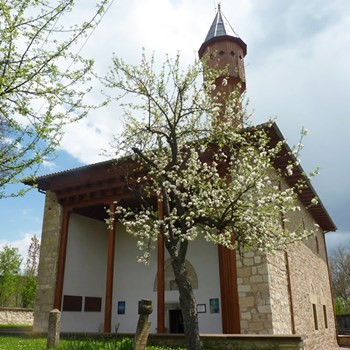 The mosque was commissioned by Mahmut Bey, a member of the Candarid house, in 1366. The building is unique because it does not use cement for any of its construction (except for the mihrab). The roof was built without using metal elements at all. This type of mosque is called as Çivisiz camii meaning "mosque without nail").

The plan of the mosque is rectangular. It was one of the first wood-columned and wood-roofed mosques in Anatolia, built using hewn stone for its exterior. Ceiling construction stands on four pillars inside, with all wood surfaces decorated by plant-dyed ornaments called kalem işi. The portal of the mosque, which was a masterpiece of art however is now kept in the Kastamonu Ethnography Museum. A replica has been mounted at this spot to replace it.

The mosque was added to the tentative list in UNESCO’s cultural category of World Heritage Site on April 15, 2014.