Eflatun Pınar lies about 100 kilometres west of Konya close to the lake of Beyşehir in a hilly, quite arid landscape. Due to its proximity to other sites, as well as the lack of any inscriptions found on site, it is likely that this monument was constructed during the second half of the 13th century BCE.

The monument is a rectangular-shaped pool fed by water from a nearby spring. The most prominent part of the monument is the high wall of reliefs that stands at the north edge and stretches out over 34 meters. The wall consists of large gray blocks built with mortar. In its center, Storm God and Sun Goddess are carved on either side in medium size images above Winged sun disks. 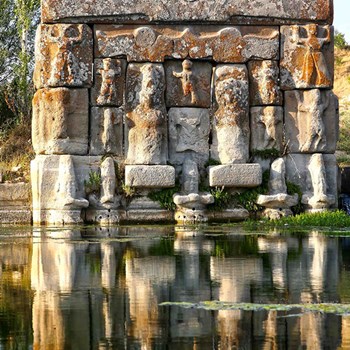 This winged sun disks are supported by ten spirits/hybrid creatures around it, and an enormous one at the top. The base has five mountain gods that are partially visible. The mountain gods at this relief are partially seen; five of them seem to be associated with water-sources (mountain springs).

The stage can be interpreted as a cosmic scene with gods and spirits holding the heavens at its top and earth at its bottom. The façade is roughly 7 meters in length and height, including the mountain gods at the base.

On either side of this facade's doorway are a couple goddess figures embedded into the walls of the pond, with a rectangular platform by the south wall that has relief sculptures on its water-facing side. Other sculptured pieces have been discovered inside and around the pond.

The largest piece of art at Eflatunpınar, a triple bull protome, is not in its original location. The piece was used as filling for a dam wall made during Roman times on the southwest side of the pond. Eflatunpınar has one of few examples Hittite Empire Period human form art that depicts frontal depictions, and Fasıllar and Akpınar are two other examples.

Due to its proximity to other sites, as well as the lack of any inscriptions found on site, it is likely that this monument was constructed during the second half of the 13th century BCE.

The spring sanctuary of Eflatun Pınar has a great importance within the water cult having a significant role in the Hititte religion. Integration of water in the architectural and religious concept is a unique feature of the site. Because of these features Eflatunpinar has been added to the Tentative List of UNESCO in 2014.