The Zeynel Abidin Mosque Complex is a historical religious building complex in Nusaybin, Mardin Province, Turkey. The complex is made up of a mosque, minaret, and shrines to Zeynel Abidin, his sister Sitti Zeynep -13th generation descendant of the Prophet Muhammad- fountains, madrasah chambers, cemetery and new ablution place. According to an epigraph on the shrines, this complex was built in the 12th century. 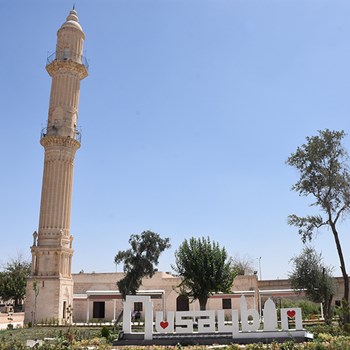 The Mosque Complex, which has an L-shaped plan and is made of rough stones, includes an open yard with a garden and an exposed courtyard. The minaret on the east side of the yard was erected in 1956. The mosque, which features a north entrance, has a square layout known as "harim," which is covered with cross vaulted roofs supported by enormous columns. The mosque's "mihrab" and "minbar" are new components. Later periods saw the structure being renovated, with prayers for women added to the communal area. According to an inscription in the madrasa, “masjid” was expanded and converted into a mosque. In fact, renovation epigraphic text claims that additions were made to the madrasah in 1891 by means of structural growth.

At the southwest corner of the mosque, there are shrines to Zeynel Abidin and Sitti Zeynep. These mounds are dome-shaped cists with a green covering on which holy Quran verses have been inscribed. Epigraphs on the doorway of each tomb state that it was erected in 1159. In addition, an inscription indicating restoration dating from 1821 is engraved on the facade of Sitti Zeynep's shrine.

The mosque has two massive cemeteries on its eastern and western facades, with ornamental turbaned stone graves belonging to sheikhs of Tayyi Tibe dating from the late Ottoman period.

The church is named for Mor Yakup, a renowned Assyrian saint who was born in Nisibis (now Nusaybin) and grew up there. In 309, he was chosen as bishop of Nisibis by the decision of an Episcopal conference held in Virgin Mary Church in Diyarbakir. He started to construct the cathedral in 313 at Nisibis, which served as both a commercial and political center for the Byzantine Empire.

He attended the First Council of Nicaea in 325, along with his apprentice Mor Afrem (St. Ephrem), a great ascetic, instructor, and hymnwriter. They went to Nusaybin after returning from the First Council of Nicaea (modern Iznik province in Turkey). They began to rebuild the Nisibis School, where theology, philosophy, logic, literature, geometry, astronomy, medicine and law were taught. Through students educated there at the school built on the ruins of an earlier pagan institution and Mor Yakup helped Christianity spread throughout Mesopotamia.

Today's main church, one of the oldest religious buildings in Upper Mesopotamia, is made up of two parts. The southern section of the structure is divided into two separate parts with two opposing buttresses. There is a 7-meter-square plaza in the east, with northern and southern walls that have two doors. Moreover, one apse is provided on the east side. One arch leading to the second part of west is located at the western side of the location. The most distinctive feature of this location's eastern side is the wall decorations. There are several friezes on door mitigation arches, apses, and western arch, which extend continuously. Another frieze was also created for the niche in the apse. 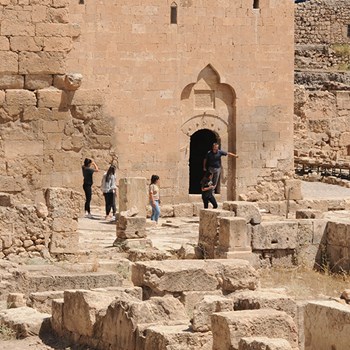 Buttresses, in the southern region, have Corinthian helmets but different sides that face to the west. On the north and south walls of the western place, there are door openings, and these upper portions were adorned with arches with fine embellishments that could be seen on the east side of the doors. The middle buttresses come close to one of the west place's doors and give it a feel of contemporaneity. Ornaments are quite unique, as they display early and deep preparation examples of decoration, which were utilized to the 5th and 6th centuries in northern Mesopotamia. It may be traced back to around 400 AD. The construction of the west buttresses is more than likely later.

The architectural style seen in the southern structure should also be emphasized. The dome with an inscription, which covers the eastern square chamber and was built in 1872, is a good example. In addition, a chamber on the western side of the monument was constructed at about the same time. Below the eastern square chamber are capsules that form a sarcophagus, where Mor Yakup's sarcophagus may be found.

Zeynel Abidin Mosque Complex and Mor Yakup (Saint Jacob) Church has been added to the Tentative List of UNESCO in 2014.