Harran is an ancient Mesopotamian city located in modern Şanlıurfa, Turkey. The archaeological site, located in Harran, was a major commercial center in the Chalcolithic Age. The city was called Hellenopolis (Ancient Greek for "Greek City") during the Early Christian period.

Despite the fact that it is situated in a dry, barren plain, Harran has managed to stay alive for 5000 years. The commerce from Anatolia to Mesopotamia and from Mesopotamia back again provided riches and an immutable culture for thousands of years through Harran and ensured its survival. 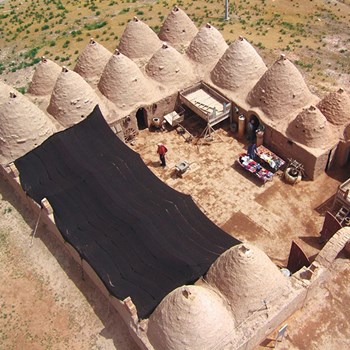 The town of Harran has a rich history dating back to 3000 BC. Notably, scripture mentions that the Prophet Abraham lived here, a key figure in Judaism and Christianity. The town was also home to one the earliest known universities in the world as well as where Roman emperor Caracalla was murdered in 217. It was regarded by residents as a center of idolatry and inhabited by Sabians who had an extensive knowledge of astrology; they worshipped moon, sun and planets.

Harran is famous for it's adobe houses, which have similar domed structures as buildings in Harran. The mudbricks used to construct these houses are made from the mud and clay of Harran, and add stability to the shape of a square-based home. Houses with conic roofs provide floor space that can keep inhabitants cool during summer months while still being warm enough for winter needs. These homes share some similarities (shape) with beehives and that's why, there are called as 'bee-hive houses'.

Harran has been on the UNESCO Tentative List since 2000. Harran was first excavated in 1950 and restoration work is going on with 80% completion.