Kültepe, which is also known as Kanesh or Nesha, is an archaeological site in Kayseri Province, about 20 km southwest.

Kanesh consists of a tell that contains both the ancient city's settlement and Assyrian civilization, and a lower town where an Assyrian settlement was found. On inscriptions dated back from 20th and 19th BCE, Kanesh is mentioned as Kanes; on later Hittite inscriptions, Kanesh is referred to as Nesa or occasionally Anisa. 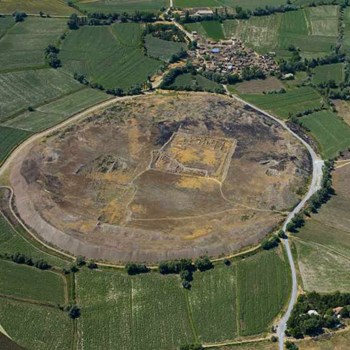 Inhabited continuously from the Chalcolithic period to Roman times, Kanes or Nesa flourished as an important Hittite and Hurrian city. A merchant colony of the Old Assyrian Empire was located there in between 21st century BC and 18th centuries BC with a king Zipani mentioned in documents dating to 15th century BC.

The quarter of the city that most interests historians is the kārum, a portion of the city set aside by local officials to be used without paying taxes as long as goods remained within its borders. The term 'karum' comes from (literally meaning "port") Akkadian language but was later extended to refer to any trading settlement whether or not it bordered water.

Numerous clay tablets have been found with information about trade between Assyrian colonies and city-states as well as merchants who traveled from the Assyrian Empire. It seems this trade was run by families instead of the state.

The Kültepe texts are the oldest documents from Anatolia. Although they are written in Old Assyrian, the Hittite loanwords and names in the texts indicate this is a record of any Indo-European language (see also Ishara). Most of the evidence found at Kültepe is typical to that of Anatolia rather than that of Assyria and the use of both cuneiform and dialect points to an Assyrian presence.

The archaeological site was added to the Tentative List of World Heritage Sites in Turkey in 2014. It is also the location where earliest traces of the Hittite language, are attested, dating back an estimated 20 centuries BC.