Laodicea was one of three ancient settlements in the valley of the Lycus River, a tributary of the Meander. Colossae is 9 miles to the east, and Hierapolis is 6 miles north.

The site of Laodicea, where the city once stood is a nearly square plateau rising about 100 feet above the valley floor, one mile from the bank of Lycus. Laodicea was located 45 miles southeast of Philadelphia and dominated ancient highways from Ephesus (100 miles to west) through Meander and Lycus valleys to Syria. Originally called Diospolis and Rhoas in 286-246 BC, Antiochus II Theos - ruler of Syria – colonized it between 261–246 BC, renamed it for his wife Laodice (whom he later repudiated and banished to Ephesus). 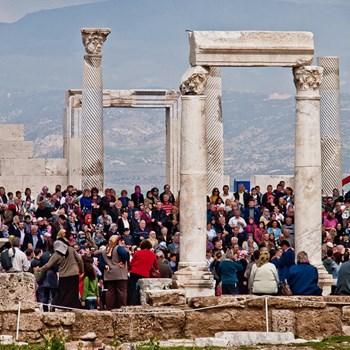 Laodicea came under Pergamum’s rule in 190 BC, and Rome's control in 133 BC. At the end of the first century BC, Laodicea was one of the principal cities of Asia Minor, famous for fabrics, sandals and medicine. Laodicia was also a major banking center where Cicero cashed drafts en route to his native Cilicia.

In the 1st century AD, Laodicea was inhabited by its indigenous population of Greek-speaking Syrians, Greeks, Romans and Romanized natives along with an important Jewish colony. These Jews regularly sent a contribution of gold to Jerusalem Temple. According to Cicero in 62 BC the Roman governor Flaccus confiscated 20 pounds of gold.

The second largest ancient city in Turkey after Ephesus, Laodicea is a place where the head of the stature of God Emperor Augustus was unearthed. The only other example of this head is in the Vatican Museum. Laodicea survived an earthquake which destroyed all towns in the Lycus Valley.

Holy Church: In the ancient city, there is an ambo platform and sanctuary sections of a church. World Christianity met in the 4th century for holy pilgrimage in here.

Zeus Temple: The excavation of 2000 years old ancient temple ruins devoted to Zeus has been ongoing for many years. So far, the archaeologists found a series of giant column galleries 11 meters high and 15 tons in weight. The broken columns are being repaired using methods that would make them look like they were built centuries ago.

A newly discovered piece of fabric from Denizli's history has been puzzling historians. This 1600-year old repair job was found in the Laodicea near the district of Eskihisar, and seems to have presumably taken place during Constantine the Great's period. The patch shows that weaving culture goes back centuries in this region

Laodicea, which is of great importance to Christianity and a Holy pilgrimage center since the 4th century CE, has been mentioned in the Bible and one of the seven churches of Revelation. Archaeological Site of Laodicea, which was included on the UNESCO Tentative List in 2013, is one of Turkey's great universal values.