The small town of Birgi, located in the Ödemiş district of İzmir province, Turkey, was originally named Pyrgion and was distorted to be called Birgi over time.

The history of Birgi is a long one, which can be traced back to the days of Phrygian Civilization (750-680 BC), and, soon after that period, by Lydia Civilization (680-546 BC), Persian Kingdom, Pergamon Kingdom from 183 BC to 133 AD. The city was ruled under Roman and Byzantine Empire until 13th century. Then, the city was the capital of Aydınoğlu Principality in the 13th and 14th centuries. Finally, It was conquered by Ottomans in 1426. 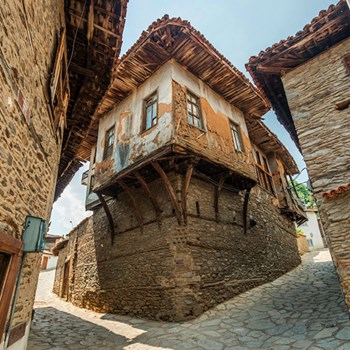 Birgi is best known for its historic residential dwellings that date from different periods. Today, there are still many architectural treasures to be seen in Birgi.Two of these most notable structures are Aydınoğlu Mehmet Bey Mosque (The Great Mosque) and Cakiraga Mansion.

Aydınoğlu Mehmet Bey Mosque (The Great Mosque) was built in 1312 and is a good example of typical Seljukid architecture. Notable features include the fine woodworking mimbar that has no metallic nails, and the mihrab that is made of dark cyan marble. The lion statue in the south-eastern corner is also interesting because statues are rare in Islamic architecture; this one was taken from a Lydian building as its spolia.

Cakiraga Mansion was commissioned in 1761 by Çakıroğlu Mehmet Bey who was a wealthy merchant. The three storey mansion is situated in place with high embankments and has a ground floor reserved for the stables, kitchen, and guest room. The first and the second floors are living quarters where there is central fireplace on the first floor to heat it up.