Lycia was a territory in Anatolia that existed before the Roman period and is best known for its ancient city, Xanthos. Ancient Lycia lay on the Teke Peninsula of Turkey's Mediterranean coast, Caria to the west, and Pamphylia to the east. The Lycian civilization is well-known for many ruins dating from the 5th and 4th centuries BC that have been discovered in this area.

The written Egyptian and Hittite sources dating from the 2nd millennium B.C. refer to a people known as "Lukka" or "Lukka." In 14th century B.C., Hittite king Suppiluliuma claimed to have subdued the "Lycia Country," which may have been Lukka, according on historical records of the Kadesh Battle. According to historians, Lukkas are referred to as "the sea people" in written sources. According to ancient historians, Lukka meant "Land of Light." 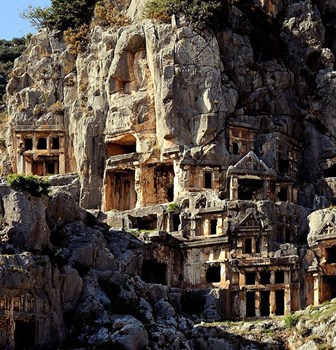 From the end of the second century B.C. until mid-second century B.C., Lycia Territory was ruled by Antiochus III, a Syrian king. The "Lycian League" was founded in the middle of the first century B.C., with 23 cities participating (although some historians believe it began shortly before 100 BC). This was the very first known democratic confederation in history, and it served as inspiration for modern democracies. In this system, principle cities had three votes while other settlements had two or one votes depending on their size.

Below you can see the most important sites of Lycian Civilisation and get more information: