Fener and Balat DistrictPlaces to Visit in Istanbul

If you're looking for more off the beaten path destinations, venture out to historically cosmopolitan Fener and Balat neighborhoods. Here families still live amongst a close community who worships in houses painted in a variety of colors, or dries their clothes on wooden strips of cloth hanging between homes.

The districts of Fener and Balat are among the oldest areas of Istanbul, which includes them on our list of UNESCO Heritage Site List. Although these districts capture a unique atmosphere, they're still rarely visited by tourists. 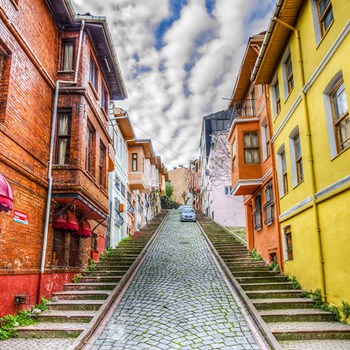 Some of the colorful, Ottoman houses can be perfectly restored, and religious buildings are seen in this district. The alleys lead up and down through a labyrinth-like path, which gives the impression that it is filled with old treasures. The people playing in the streets show Istanbul's charm out of time that one can uncover while visiting here.

- The first district, Fener which was historically the most important Greek quarter of the city is a short half-hour walk up the Golden Horn to Eminönü. It flourished after the capture of Constantinople by Ottomans when Sultan encouraged Orthodox people to settle there and it became prosperous. This showed in these excellent buildings as evidenced by this area.

Fener is home to several places of worship, including the Ecumenical Patriarchate of Constantinople established following the capture and church of St. George established as a fundamental place for 250 million Orthodox Christians, like those who believe in it as their spiritual authority equivalent to the Vatican. The imposing Greek Orthodox High School stands in red bricks overlooking Golden Horn and is another symbol of Fener district.

Right next to the Fener district is Balat, the former Jewish quarter of Istanbul, which developed from 1492 when the Jews persecuted under the Spanish Inquisition were welcomed by the Sultan who even sent his fleet to Spain to rescue them.

Ethnic groups historically have moved through Balat as they achieved success. For example, Galata was the predominant Jewish neighborhood in Constantinople, and still has 3 active synagogues. One of the most charming neighborhoods in Istanbul today, it has experienced a new lease of life since 2000 with the Unesco plan that allowed for restoration and development.Turkish television series assault this district for its architecture and its uniquely charming nature..