Sobesos Ancient City is located on the outskirts of Sahinefendi Village, one of Cappadocia's many settlements. It was discovered by treasure hunters in 2002 and offers a little ancient city from Roman period. This is accepted as the only Roman Ancient city in Cappadocia. The ancient city is on the way to Soganli Valley and people usually visit this place while they are going there.

Archeologists have uncovered the remains of the Roman Bath, Agora, Basilica and Bouleterion buildings. The archeologists are only able to explore this city every two years for around three months due to lack of funding from government. 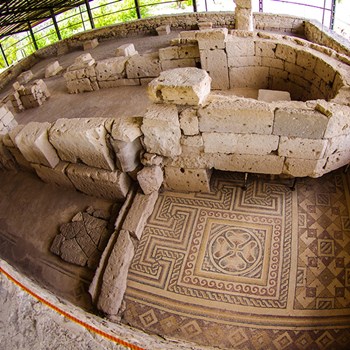 The Roman Bath section has a hypocaust - in-floor heating system, central heating. The "Agora" is an outdoor marketplace next to the bath house and is only for shopping basic goods like fruit, vegetables, clothes.

The Bouleterion had a similar function to our modern-day legislature and is one of the best examples in Cappadocia of a square-shaped building rendered into stone. The Basilica's mosaic with depictions of cross symbols is another example which remains unrivaled as far as mosaics are concerned.

The graveyard is surrounding the basilica and some of the corpses are on display in churches, such as Goreme Open Air Museum.