Ortahisar TownPlaces to Visit in Nevsehir

The town of Ortahisar is a popular tourist destination for its friendly villagers, breathtaking stone houses, narrow street and beautiful churches as well as the castle-like rock formation after which the town is named. This natural fortress that is 90 meters high has part of it crumbled away, revealing some of the interior. The Ortahisar Castle is accessible by a staircase and overlooks the fairy chimneys of the valleys of Ortahisar and Mt. Erciyes’ snowy top.

The town's central location among popular tourist towns of Goreme, Urgup, Uchisar and Nevsehir makes it an optimal stop for travelers. You will notice natural air-conditioners - the best example in Cappadocia; entering Ortahisar you'll see doors at both sides neatly installed into the rock surfaces that can be opened to serve as cool-air storage rooms where local vegetables are preserved. 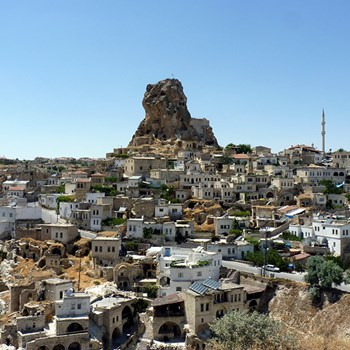 Ortahisar also contains the Cambazlı Church, a cross-in-square church with 13th century wall paintings. It is now used as a storehouse. A little outside, there is Üzümlü Church with frescoes from 8th or 9th century AD.

In addition to the rock-cut buildings in Ortahisar's center, simple structures with a rough appearance characterize the town. The upper houses are of tuff blocks and lack mortar.

A number of buildings are used for food storage in early eras. The largest of these structures stand only one or two stories tall and have an exterior staircase made out of tuff-stone slabs. More recent examples, which date from the Roman era onward, are typically all made with white marble mortar blocks but differ in size and construction techniques due to region. For example, the exterior walls consist of white limestone that is capped with a simple cornice.

Northeast of Ortahisar is the monastery complex of Hallaç. This complex, which is centred on an enclosed courtyard, has entrances that are lower than the level of the courtyard.