Mustafapasa Village or Sinasos in Greek, located about 10 km from Goreme City, is a very famous village with its huge mansions featuring elaborately carved doors and window-frames. The majority of these luxurious homes were built between 150 and 200 years ago by the families who become more prosperous in Istanbul due to their trade with fish.

The houses of this village were actively used until 1924, when a population exchange happened between Greek and Turkish citizens. All the Christian citizens in Turkey and Greece had to leave their respective country during the compulsory migration. All the Christian citizens from this village and all over Turkey had to leave their country to Greece as well as all the Turkish Muslim citizens in Greece had to move out from Greece to Turkey because of population compulsory. According to officials, about 1.2 million Christians left Turkey while about 600 000 people came from Greece. 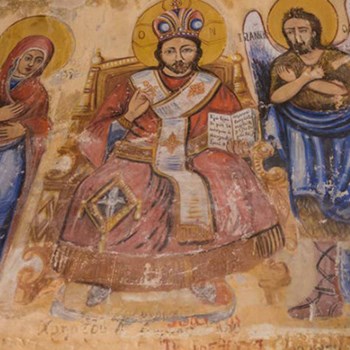 The village of Sinasos had more than 5000 citizens in 1923, but after the population exchange in which Greeks were replaced by Turks; it became a deserted village with about 1700 people who arrived. As these new arrivals were fewer than those that left, most of the houses became abandoned and nobody was using them. Most of the houses have sadly been left to weather for decades.

The village has 3 beautiful churches that are called as Constantine and Helena Church, The Church of St. Basile and the Church of St. Nicholas. The first church is located in the center of the village and it is a place where vicars do special rituals every year on behalf of their patriarchs. Its architecture has been dated to 1729 with restoration done in 1851. The façade contains detailed relief sculptures depicting some angels, dragons, eagles and grape motifs.

The church of St. Basil is located outside of the town and has some modern frescoes from 19th century. The original paintings and the design plan have been entirely repainted in 19th century form.

The monastery and church of St. Nicholas is in the first valley, which has been completely restored a few years ago.