The Keslik Monastery is located in relatively uncharted territory on the south side of Cappadocia. It's one of the least visited monasteries, which may come as a surprise given how interesting it is to explore. The caretaker of the monastery, Mr Cabir, also speaks several languages and does his best to let visitors understand what they're seeing. He's been at this for many years now with few breaks-he certainly enjoys what he does! 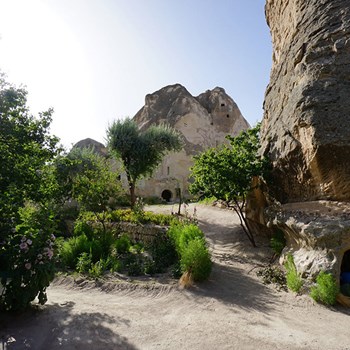 Keslik Monastery features three churches of various ages that are worth exploring. The monastery is thought to have been carved by order of a sixth- or seventh-century ruler, but the date for the oldest churches hasn't been determined yet. In spite of its remote location and stunning scenery, Keslik Monastery has many architectural treasures-three different churches from different time periods, and dwellings for monks set among oak forest trees.

One of the most remarkable buildings in the monastery is the Church of Archangels, which exhibits important paintings of Jesus and his life. The majority of images have been preserved and still exist today with minimal damage to the entrance (lower part). You will be able to see the childhood and presentation of Mary to the temple in this church, which is very rare in Cappadocia. It is a must to take a look around this church because there are many beautiful paintings as well.

Another church that attracts the most attention is known as Stefanos Church. This church was built with a flat ceiling because of the difficulty of stone carving. Additionally, there is a cross on this church which causes many people to believe it's called Crusader Church.